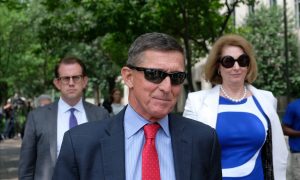 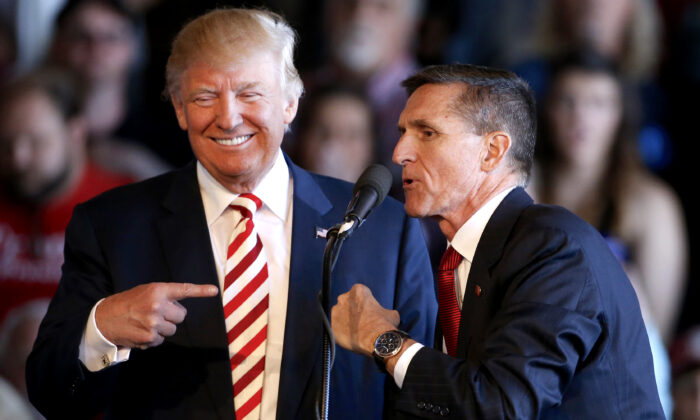 The text of the formal pardon of former national security adviser Michael Flynn covers the entire work product of the Mueller probe as well as the perjury charge contemplated by the judge presiding over the Flynn case.

The Department of Justice filed the signed copy of the presidential pardon on Nov. 30, exactly three years after Flynn signed a guilty plea deal in which he said he lied to the FBI.

The Executive Grant of Clemency states that President Donald Trump has issued a “full and unconditional pardon to Flynn,” which covers the original false statements charge, any matters that arise from the guilty plea, or from any of the proceedings in the case.

The president also pardoned Flynn “for any and all possible offenses within the investigatory authority or jurisdiction of the Special Counsel appointed on May 17, 2017,” including any grand jury proceedings that were conducted by Mueller’s team, the text of the pardon states.

Trump announced the pardon in a Twitter message on Nov. 25.

“It is my Great Honor to announce that General Michael T. Flynn has been granted a Full Pardon. Congratulations to @GenFlynn and his wonderful family, I know you will now have a truly fantastic Thanksgiving!” the president said.

Prior to the pardon, the Flynn case hung in limbo for months as the judge took no action on a request by the prosecutors to dismiss the case. The delay followed a ruling by a federal appeals court, which found that Judge Emmet Sullivan was in his right to appoint a court amicus to argue against the prosecutors’ motion to drop the case. The circuit court had instructed Sullivan to act with “due dispatch.”

Flynn’s case took on a new life in 2019 after he dropped his original counsel and brought on a team led by former federal prosecutor Sidney Powell, who pressed the Department of Justice to turn over a battery of undisclosed documents by asserting that the prosecution had withheld exculpatory evidence.

In a statement issued on Thanksgiving, Flynn thanked “every single patriot who circled me with their prayers, wisdom, and kindness.”

“Never again should any family or individual be so viciously targeted, maligned, smeared, and threatened such has been the experience of my family and I. Not you and your loved ones, not me nor President Trump, our First Lady, and the Trump children,” he wrote.

In a statement shared on Twitter, Flynn’s family said they are “forever appreciative” to the president for giving the former national security adviser back his freedom “in undoing a hideous wrong.”

“For four long years, our family and millions of American patriots stood arm-in-arm together with our brother, General Michael T. Flynn, fighting the vicious, deep-rooted corruption of government institutions and vengeful individuals intent of destroying General Flynn and our country in shameful defiance of justice and the Rule of Law,” his family wrote.

Isabel van Brugen and Katabella Roberts contributed to this report.