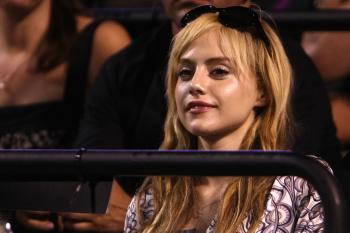 Brittany Murphy passed away last Sunday after being found unconscious in her home in the Holly Wood Hills. Her death, reported to have been a natural one, was confirmed later that day by Cedar Sinai Hospital. The Hospital stated that there were no signs of foul play and determined the death to be a result of cardiac arrest.

Those attending the private ceremony were close family and friends of Ms. Murphy. A larger public ceremony honoring for the life of Brittany Murphy is expected to be set up in the Spring and will be open to the public.

"There are plans to have a more public memorial sometime in the new year when other people can come remember and share memories of her, but today is just small and very private for those close to her," Alex Ben Block told E! online.

Block, an actor and close friend to Murphy, served as a pallbearer and a spokesperson regarding the funeral for the Murphy family.

The service was by invitation only. In attendance were her husband Simon Monjack and close friends such as Eric Balfour and Penny Marshall. Murphy’s father Angelo Bertolotti who lives in Florida did not attend the funeral.