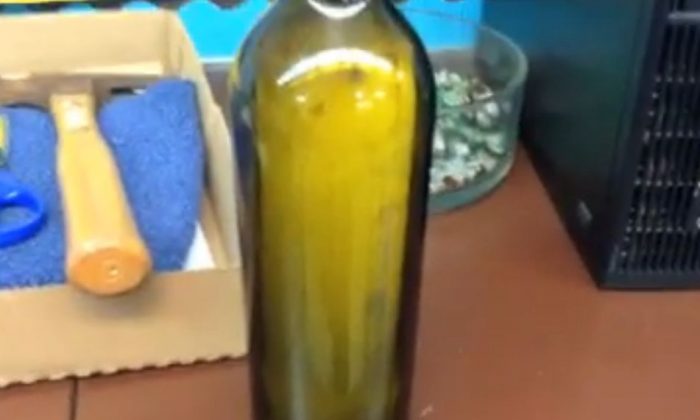 Brittanie Penrose, a Utah woman, and friend Aaron Lanari thew a message in a bottle into the Pacific Ocean in 2010, speaking of Penrose’s fight against brain cancer.

“I just described me and what I’m doing, and at the time I was a phlebotomist and was fighting cancer,” she told the Deseret News. She was uncertain about her future so she tossed the letter.

Three years later, she heard her name on a video from Guam, where the bottle apparently washed up and was found.

According to the Daily Mail, the bottle was found on a beach in Ipan, Guam, by a 14-year-old high school student, Javier Sanchez who took it back to his teacher.

Guam teach Linda Tatreau was shown reading the letter that was found early this week. “Hello, my name is Brittanie Somebody,” Tatreau said.

The message in the bottle traveled from Oceanside Pier in San Diego County, Calif., to Guam–nearly 6,000 miles across the Pacific.

“I was just in total shock,” Penrose said. “I was like, ‘Is this real? This can’t be happening.'”

Lanari was also surprised about the discovery.

“First I said I hope they don’t prosecute us for littering,” he told the Pacific Daily News.

Penrose said that her cancer is totally in remission. “I totally forgot all about it,” she told the paper.

Neither have a connection to Guam, which is a territory of the United States.

In the message, Penrose said that she is 24 from Salt Lake City, adding that the finder of the bottle should look for her on Facebook, leaving an e-mail address.

Lanari left a message in the bottle, mostly lyrics he wrote for himself.

“When intelligence is ignorant and empathy is absent, death and hate are present when joy and love are absent,” he wrote. “Those lyrics just came from a conversation I’d had with someone, talking about the world and how people are sometimes,” he told the paper.