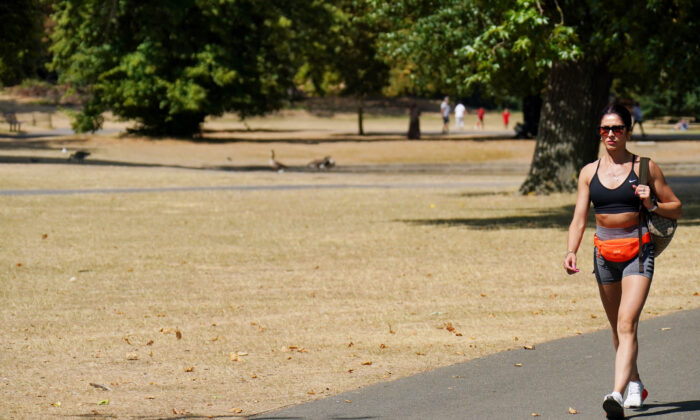 A visitor to London's Regents Park walks past a portion of parched parkland on Aug. 8, 2022. (Jonathan Brady/PA Media)
UK

Britons to Expect Another Sunny Week Amid Dry Summer

Britons can expect “mostly fine and dry” weather throughout this week, the Met Office has said.

It comes after Sunday brought wall-to-wall sunshine for most of Britain, with a high of 28.1C recorded in Frittenden, Kent.

The temperature won’t reach the record-breaking level seen in July, but it will hit up to 35C in places, and the dry weather will continue over a “prolonged period,” according to the forecasters.

The Met offices said that north and west Scotland will see some outbreaks of rain and “a fresh breeze,” but most areas in the UK will remain dry with “prolonged sunshine.”

Temperatures are expected to gradually increase throughout the week, reaching above 30C in most of England. The Met Office said heatwave thresholds will likely be met for much of the UK, particularly England and Wales.

Met Office meteorologist Tom Morgan said the hottest areas are expected to be in central and southern England and Wales on Friday and Saturday, with temperatures potentially peaking at “35C, or even an isolated 36C on Saturday,” but meteorologists are “quite confident” that the weather will be cooler than it was during the heatwave in July, when above-40C temperatures were recorded for the first time since the record began in the 1860s.

He also said not everyone in the UK will see the sunny conditions at the beginning of the week, “but towards the end of the week, even Scotland and Northern Ireland will join the rest of the UK in having generally fine, sunny, and very warm if not hot conditions,” he said.

“It does look like a prolonged period of dry weather and obviously that’s bad news for southern England where some rain would really be useful now,” he added.

The Met Office has urged people to follow precautions to avoid becoming overheated, including closing curtains and windows during the day and avoiding the midday sun.

According to the UK Centre for Ecology and Hydrology, low rainfall in July has left river flows in central, southern, and eastern England, and eastern Scotland, below normal, with many seeing “exceptionally” low levels of water flowing in them.

Households have also been urged not to light barbecues or bonfires, or let off fireworks or sky lanterns as tinder-dry conditions left the countryside, as well as urban parks and gardens, extremely dry, raising the risk of more devastating wildfires, with rivers, groundwater, and reservoirs at low levels.

Two water companies have already announced hosepipe bans and others have warned they may need to follow suit.