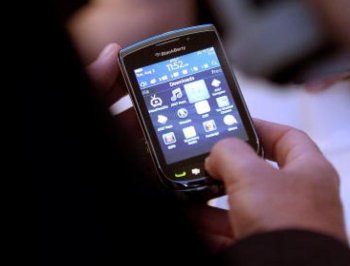 The new Blackberry Torch 9800 smartphone is seen after being unveiled at a news conference August 3, 2010, in New York City. Smartphones have helped Britons cram more media consumption into their day, according to Ofcom research. (Getty Images)
US

Britons Spend Nearly Half Their Time Engaging in Media and Communications

Statistics published in Ofcom's annual Communications Market Report show that the average person in the UK spends around seven hours per day on the internet, watching TV, listening to the radio, or increasingly, using their mobile.

With the average person awake for around 16 hours per day, this works out at 45 per cent of their day. Men were found to spend nearly an hour more per day using media than women.

The increasing popularity of smartphones is one way in which consumers are cramming more in by multitasking. By using several different types of media at the same time the average person manages to squeeze eight-and-three-quarter hours' worth of media into about seven hours. The research was produced from industry data and a survey of 1,138 adults aged 16 and over.

Even though usage has increased, the cost fell for the fifth year running. “Consumers are using communications services more – phone calls, texting, and the internet. Yet they are paying less despite getting more, partly through buying in bundles,” said Peter Phillips, Ofcom Partner, Strategy & Market Developments, in a news release.

“Younger people have shown the biggest changes in how we use media – particularly using different media at the same time. But the divide between younger and older people’s use of technology is starting to narrow as more older people are getting online and finding that things like e-mail are very important to them,” Phillips added.