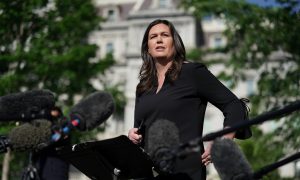 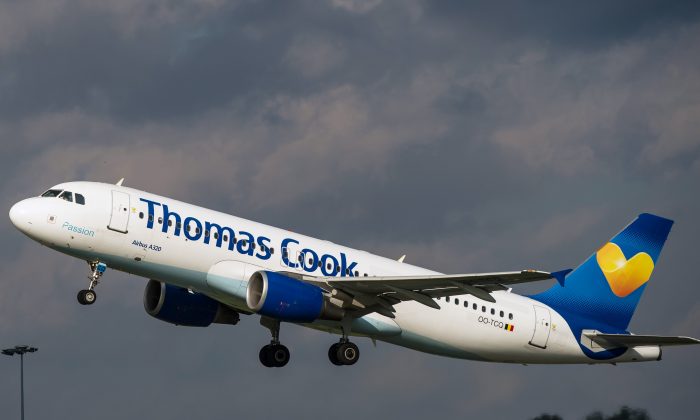 A Thomas Cook Airbus A320 takes off from the Lille-Lesquin airport, northern France, in a file photo. (Philippe Hugeun/AFP/Getty Images)
UK

Two passengers were kicked off a flight to London last week after one woman complained about three Muslim passengers wearing prayer robes, allegedly calling them a “threat” and “terrorists.”

The incident, which left fellow passengers in tears, took place on a Thomas Cook Airlines flight to London Gatwick airport from Dalaman, Turkey on July 12, the Mirror reported.

The woman who made the racist remarks reportedly delayed the flight by 70 minutes, and told crew members they were “disgusting” and that “it shouldn’t be allowed” for her to be made to fly with “terrorists.”

The woman, who reportedly seemed to be in her 30s, caused outrage among the passengers.

A 40-year-old man who claims he was aboard the same plane where the comments were made, described the offending passenger as “crazy” and “mad.”

a passenger on our Thomas Cook flight #MT105 from Dalaman to Gatwick refuses to board the plane because three bearded men in white prayer robes are on board. All passengers are united in anger against this crazy #racist woman. It’s 2am #fedup

“A passenger on our Thomas Cook flight MT105 from Dalaman to Gatwick refuses to board the plane because three bearded men in white prayer robes are on board. All passengers are united in anger against this crazy racist woman. It’s 2 a.m,” father-of-three Mario Van Poppel wrote on Twitter.

“The mad passenger was escorted out of the plane. Thomas Cook cabin crew did a great job,” Van Poppel wrote later.

Other passengers claimed the woman said she wouldn’t board the plane while the trio were on the plane.

Speaking to the Daily Mirror, an 18-year-old passenger from London, Shamea Oldham, said: “She was stood at the front of the plane screaming abuse. She kept saying she didn’t want to fly with them and refused to let the plane take off with them on board.”

“She said the other passengers were disturbed to want to fly with them. What she was saying was appalling. She was screaming saying they were a ‘threat’,” she recalled.

Authorities decided to remove two women from the aircraft at around 2.25 a.m. following the ordeal, which meant that the flight took off over an hour after its original departure time of 1.25 a.m., reported the Mirror.

In an interview with the Mirror, Van Poppel said he was making his way to London after a holiday with his three children and pregnant wife, when the woman made the aggressive remarks.

When Van Poppel boarded, he said he heard the offending passenger telling a Thomas Cook Airlines crew member that she was having a “panic attack.”

“It went on longer and longer until another passenger asked a flight attendant what was happening. She said the woman was refusing to board the plane,” he explained to the outlet.

“They were trying to talk her around but she wasn’t having it. Eventually, she came back to take her hand luggage off the plane.”

“She was swearing and was very aggressive. She used the word terrorist,” he added.

Van Poppel said the woman’s behavior left children and an elderly woman in tears, while the victims of the attack “kept their cool,” despite being offended.

He described how police led her and other male passenger off the aircraft, while other passengers jeered at her.

“It was nice to see the whole plane was united against her. It wasn’t right what she did. Everyone was standing up for the guys,” he told the Mirror.

*THREAD*
So today my flight was delayed 2/3 hours cause 2 racist white women refused to fly with 3 Asian Muslim men. When confronted for their disgusting behaviour 1 went on to scream abuse & call me a ‘fat bitch’

In a statement, a spokeswoman for Thomas Cook Airlines said, “Two passengers on flight MT105 from Dalaman to London Gatwick were removed from the aircraft by police following offensive behavior on board.”

“The safety of our customers and crew is always our first priority and we do not accept this kind of behavior on our aircraft,” she added.

“We are sorry to our customers for the delay this caused to their flight.”