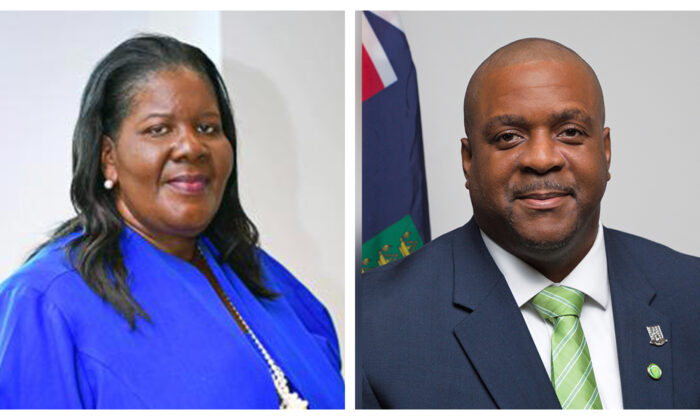 The premier of the British Virgin Islands and Managing Director of BVI Ports were arrested in Miami on April 28 on charges related to drug trafficking and money laundering, the United States Drug Enforcement Administration (DEA) confirmed.

Premier Andrew Alturo Fahie and Oleanvine Maynard, as well as Maynard’s son, Kadeem, were arrested by DEA agents at Miami-Opa-Locka Executive Airport and charged with conspiracy to import five kilograms or more of cocaine and conspiracy to launder money, according to a criminal complaint (pdf).

Maynard’s son is facing the same changes in the alleged plot.

Fahie—who is the head of the government—and Oleanvine Maynard had allegedly gone to the airport to meet with undercover DEA agents disguised as Mexican drug traffickers, and check on a shipment of $700,000 in cash that they had expected to receive in exchange for helping to smuggle cocaine from Colombia to Miami and New York.

The DEA said the investigation was launched in October 2021 after a DEA confidential source had several meetings with “a group of self-proclaimed Lebanese Hezbollah operatives … who stated that they had business ties to South Florida and the Middle East.”

Those meetings took place on the island of Tortola in the British Virgin Islands, the complaint alleges.

The confidential source asked the group to help facilitate the use of Tortola as a temporary storage port for cocaine transported from Colombia by boat and destined for the United States, it says. This would have included the subsequent laundering of the drug proceeds, the complaint states.

According to the affidavit, a member of the group agreed to approach the head of security for Fahie who could offer protection for such activities in return for payment. A group member also claimed that he “owned” Oleanvine Maynard, as per the complaint. A meeting with Maynard was then set up, however, group members said Maynard demanded an up-front payment.

On April 7, 2022, the source went to Tortola and met with Oleanvine Maynard and her son, Kadeem, and the conversation was recorded, the affidavit states. During the long drive to the meeting, Fahie allegedly told the source that “the British didn’t pay him much.”

Also during that meeting, the DEA source told Fahie that he worked for people in Mexico, and they wanted to use of the ports in Tortola for free passage of 3,000 kilograms (6,600 pounds) of cocaine at a time.

The cocaine, which would come from Colombia, would pass through the BVI, then Puerto Rico on its way to Miami and New York, the source told them, according to the affidavit.

It would be packaged in construction material and bundled inside 5 kg buckets of waterproof paint so that it would not test positive for cocaine.

The confidential DEA source proposed paying Fahie and Maynard a percentage of his cocaine sales in exchange for their help in passing the drugs through their ports, which Fahie estimated to be more than $7.8 million, and to which they agreed.

In a statement, the DEA said the charges should “should send a clear message” that “anyone involved with bringing dangerous drugs into the United States will be held accountable, no matter their position.”

“Today is yet another example of DEA’s resolve to hold corrupt members of government responsible for using their positions of power to provide a safe haven for drug traffickers and money launderers in exchange for their own financial and political gain,” officials said.

The British Virgin Islands is a British Overseas Territory in the Caribbean Sea, located east of Puerto Rico and the U.S. Virgin Islands. It has a  population of about 35,000 people.

The Governor of the British Virgin Islands, John Rankin, was appointed by the Queen and acts on her behalf.

Rankin also confirmed the arrests on Thursday, stating: “I realise this will be shocking news for people in the Territory. And I would call for calm at this time.”

He noted that the arrests were not linked to the Commission of Inquiry report, which was set up by the UK last year in response to allegations of corruption and abuse of office.

“The remit of the Commission of Inquiry focused on governance and corruption, and was not a criminal investigation into the illegal drug trade,” Rankin said. “To avoid unnecessary speculation, I intend to move ahead urgently on publication of the Inquiry Report so the people of the BVI can see its contents and its recommendations in the areas it addresses.”

Fahie has previously denied accusations of corruption high up in the BVI government made by the previous governor of the British Virgin Islands, Augustus Jaspert.

“It is regrettable that the former governor has made some very unsubstantiated allegations towards the territory which have the potential to be damaging to our reputation,” Fahie told the Financial Times in an interview in January. “We do call on the former governor to apologise.”

Meanwhile, British Foreign Secretary, Liz Truss said on Thursday that she was “appalled by these serious allegations,” in a statement on Thursday.

“This arrest demonstrates the importance of the recently concluded Commission of Inquiry,” Truss said. “I have spoken to the Governor of the BVI and he will be holding an emergency meeting of the Territory’s Cabinet later today.”

Truss noted that Governor Rankin will lay out the next steps to take on Friday, including the swift publication of the Inquiry’s report.

It is not immediately known if Fahie and Maynard have legal representation.