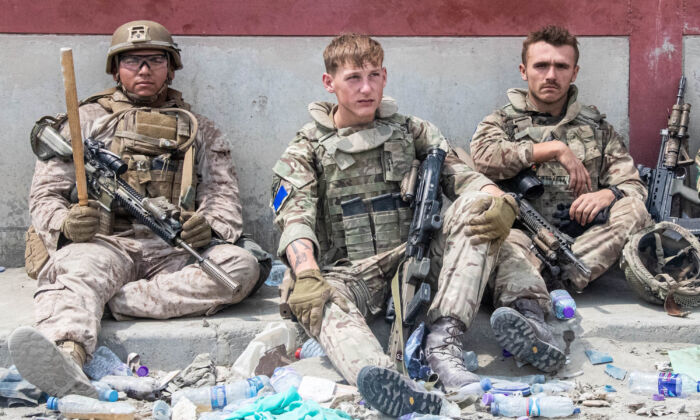 Members of the British and US (left) military engaged in the evacuation of people out of Kabul, Afghanistan, on Aug. 20, 2021. (MoD/PA)
UK

British troops have been praised for running towards the “carnage” caused by a suicide bombing, which took place as they tried to help Afghans flee the Taliban.

Brigadier James Martin, commander of 16 Air Assault Brigade, said the response to the attack near Kabul airport was “one of the finest things I’ve seen”.

He added this included providing a security perimeter to allow the U.S. forces to remove their wounded and killed with “dignity”, and in a safe manner.

At least 169 Afghans, 13 U.S. service personnel, two Britons and the child of a British national died in a bombing carried out by ISIS-K, an Afghan offshoot of the ISIS terrorist group, last week.

Brigadier Martin was speaking after his involvement in Operation Pitting, which helped evacuate more than 15,000 people from mid-August.

Addressing the bombing, he told reporters: “The way in which I witnessed our soldiers react to that incident was one of the finest things I’ve seen.

Speaking to Sky News, he also said: “It was carnage, it’s carnage. When that level of explosion, and combination of shrapnel, is detonated, there is only one result. And that is carnage.”

Reflecting on the UK’s 20-year deployment to Afghanistan, Brigadier Martin also told reporters: “I think it’s fair to say none of us would want to see Afghanistan where it is at the moment.

“But I would observe a couple of things.

“In that 20 years, not a single terrorist attack emanated from Afghanistan and ultimately that is why the coalition went in there in the first place.

“During that time I think I’m right in saying roughly 6.3 million women were educated, a legacy that will continue—you can’t un-educate those women.

“I suppose my final observation would be a question of my own, which is what price 20 years of freedom for the people who lived in Afghanistan during that period?”