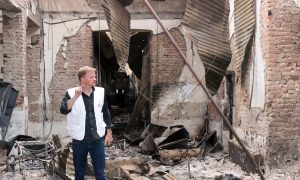 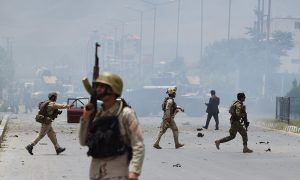 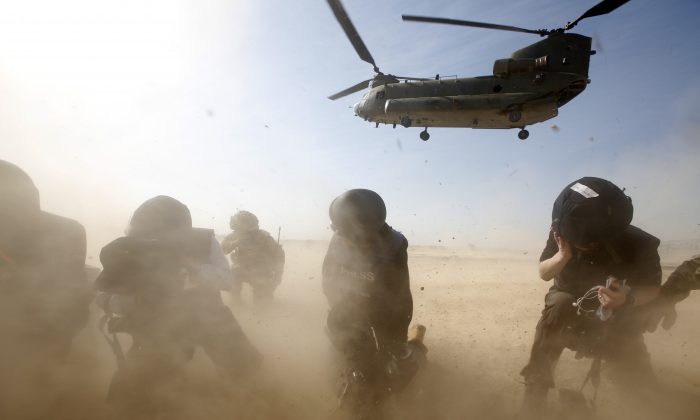 KABUL, Afghanistan—When Afghanistan’s President Ashraf Ghani took office, he ushered in a period of hope for the country’s traumatized and war-weary people that decades of violence would soon end. But just one year later, British troops are deploying to help beleaguered Afghan troops regain control of a strategically important district in poppy-producing Helmand Province, and many Afghans now believe the Taliban are winning.

The development came a day after a Taliban suicide bomber killed six U.S. troops near a major military base—the deadliest day for American troops in the country since 2013.

Fighting raged between Taliban and Afghan forces in Helmand’s Sangin district, where an official said the district’s army base was the only area that had not fallen to the Taliban.

A British Ministry of Defense statement late Monday, Dec. 21, said “a small number of U.K. personnel” have been deployed to Helmand “in an advisory role.” The U.K. has 450 troops in Afghanistan as part of NATO’s training mission.

Fighting raged between Taliban and Afghan forces in Helmand’s Sangin district, where an official said the district’s army base was the only area that had not fallen to the Taliban. He spoke on condition of anonymity because he was not authorized to speak to the media.

The spokesman for the Helmand governor, Omar Zwaq, said government troops were able to deliver supplies to those holed up inside mid-afternoon Tuesday. But, he added, there was no letup in the fight for Sangin.

Taliban spokesman Qari Yousaf said the siege continued “and the government will soon announce their defeat.”

Helmand is important to the Taliban. The lush southern province is home to endless poppy fields and the source of almost all the world’s opium, which helps fund the insurgency. The head of Helmand’s provincial council, Muhammad Kareem Atal, said about 65 percent of Helmand is now under Taliban control.

There are currently about 13,000 foreign troops in Afghanistan, including 9,800 Americans.

Security has worsened across the country as the Taliban test the mettle of Afghan security forces following the end of the international combat mission last year. While they don’t typically hold any territory they win for more than a few hours or days, the Taliban have dealt a massive blow to the confidence of the overstretched Afghan forces, who are fighting the insurgency alone for the first time. Officials have said that casualties, as well as attrition and desertion, have taken a toll on numbers of government forces, while the Taliban strength seems never to diminish.

There are currently about 13,000 foreign troops in Afghanistan, including 9,800 Americans, with a mandate to “train, assist, and advise” their Afghan counterparts. That’s compared to 140,000 foreign troops at the peak of combat operations in 2011.

Officials see no traditional winter slowdown in the insurgents’ quest to overthrow the Kabul government, especially in the warmer southern provinces of Helmand and Kandahar. They expect tough fighting in 2016 as what the Pentagon last week called an “invigorated Taliban” steps up its fight.

At the same time, Ghani’s government appears paralyzed by indecision and a lack of political intelligence that sees him use public appearances to deliver lectures but remains incapable of permanently filling vital security posts such as defense and intelligence, both of which are run by acting ministers.

This week, a senior official said he was unable to reach Ghani and resorted to Facebook to warn of the Taliban’s encroachment on Sangin. Hundreds of Afghan security forces have been killed fighting the Taliban across the province in the past six months, Helmand’s deputy governor Mohammad Jan Rasulyar said.

It wasn’t the first time an official used social media to send a message to the president—former intelligence agency chief Rahmatullah Nabil used his Facebook page earlier this month to resign.

The cry for help from Rasulyar finally galvanized the government into action.

Political analyst Haroun Mir said such incidents were an indication of “how remote the political elite have become from the reality on the ground,” obsessed with infighting and intrigue rather than fixing the country’s problems.

The cry for help from Rasulyar finally galvanized the government into action. Chief Executive Abdullah Abdullah called the Helmand situation a “top priority,” and commandoes and special forces were sent to save Sangin from an insurgent takeover.

It also appears to have prompted Britain’s Ministry of Defense to announce the deployment of its own troops to the region to help fight for Sangin, where Britain lost more than 100 of its 456 fatalities during its 13-year combat mission in Afghanistan. It was not clear if U.S. troops were involved in the effort to protect Sangin, but a NATO official said there had been no U.S. airstrikes on Sangin throughout December.

Mir compared Helmand to Kunduz, the northern Afghan city that the Taliban took over and held for three days in September, sending shockwaves across a country that had come to believe the insurgents were not strong enough to take urban areas.

Now, people are starting to believe the Taliban are indeed stronger than the government. With insurgents on the outskirts of Helmand’s capital Lashkar Gah, and districts across the province either in Taliban hands or threatened with takeover, “it’s time for the president to recognize that he is not an academic anymore, he is a war president, and he has to tell the people what he can do. And do something,” Mir said.

He said the main reason for the delay in sending reinforcements to the area was because of its remoteness and, during the summer months, the punishing climate.

The commander of U.S. and NATO forces in Afghanistan, U.S. Army Gen. John F. Campbell said recently that the Afghan forces were still challenged by practical issues such as logistics, as well as lagging confidence.

“There are some places in Helmand they do think the Taliban are 10 feet tall, that they are better trained, they got better weapons,” Campbell told The Associated Press in an interview earlier this month. “It is a confidence thing.”

The Taliban claimed responsibility for the Monday suicide attack on U.S. troops that killed six near Bagram Air Field. Two U.S. troops and an Afghan were also wounded when the bomber rammed an explosives-laden motorcycle into a joint NATO–Afghan patrol.

U.S. Ambassador to Afghanistan P. Michael McKinley issued a statement of condolences Tuesday to the families of the dead “as they face such heartbreaking news during the holiday season.”

Air Force Staff Sgt. Peter Taub, 30, with the Air Force Office of Special Investigations, was killed in the attack, his mother, Arlene Wagner, told The Associated Press on Tuesday. She said Taub was stationed at Ellsworth Air Force Base in South Dakota and leaves behind a pregnant wife and a 3-year-old daughter.

Monday was the deadliest day for American troops in Afghanistan since May 2013, when five were killed by a roadside bomb in the country’s south and two killed by an Afghan soldier in an insider attack in the west. Before Monday’s attack, the most recent American casualties in the country were on Aug. 22, when three contractors were killed in a suicide attack in Kabul.