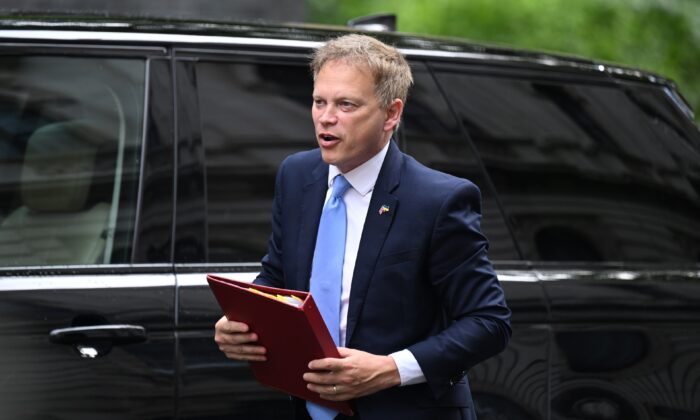 Secretary of State for Transport Grant Shapps arrives for the weekly cabinet meeting at Downing Street in London, on May 24, 2022. (Leon Neal/Getty Images)
UK

Britain’s Transport secretary Grant Shapps has put forward a plan to cap all bus rides outside of London to £2.

Shapps said he believed cutting transport costs for people on low incomes was a direct way of addressing the cost of living crisis.

“The most vulnerable in our society need concrete help in the coming year, measures that make an immediate and tangible difference to daily spending,” Shapps wrote in The Telegraph on Aug. 14.

Shapps was a candidate for leadership of the conservative party. He pulled out early, after failing to garner enough support, and backed Rishi Sunak. Polling has Liz Truss as the only other candidate left in the race as the front runner and likely to become Britain’s next Prime Minister.

Shapps said people on low incomes need to spend money to get to work and the government needed to find ways to ease this burden.

“Buses are for all of us, the most ubiquitous form of public transport. With a pre-pandemic annual total of some four billion journeys, bus travel dwarfs rail travel,” Shapps said.

“Buses are the most democratic form of transport but they are used disproportionately by people on lower incomes, many living in rural areas, who find running a car impossible or just too burdensome.

“For many families, bus fares are part of the core household budget, a cost that must be factored-in to weekly overheads,” Shapps added.

Shapps set out his exact proposal, which according to The Telegraph he has been working on since early this year.

“So, I propose that we set a £2 fare cap for every bus journey in England outside London this autumn, lasting 12 months,” he wrote.

“This would inject some certainty into an unpredictable economic landscape, a spending roof that, unlike energy bills, cannot be breached. A simple measure that provides some much-needed reassurance deep into 2023.”

Shapps believes the scheme would be affordable.

“Too expensive? Well, a one-year cap would cost the taxpayer about £260 million, a sum far below those being suggested to soften coming energy price hikes,” Shapps wrote.

Low or free public transport is a cross-party and international trend that has gained traction in recent years. The trend is driven by concerns about the environment, congestion, and as a way of getting support from voters.

Labour mayors including Andy Burnham in Greater Manchester, Steve Rotheram in Liverpool, and Tracy Brabin in West Yorkshire have devised similar schemes to the one Shapps is proposing, which will start in the autumn and run for three years.

In Germany, the lower house the Bundestag introduced a heavily discounted monthly transportation pass, allowing passengers in the regions to travel at a discount for the summer months. In Tallinn, Estonia, free public transport was introduced in January 2013 and extended to most of the rest of the country in 2019.