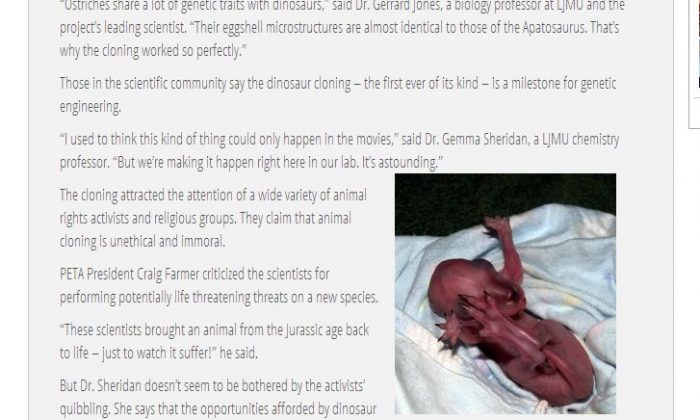 “The dinosaur, a baby Apatosaurus nicknamed ‘Spot,’ is currently being incubated at the University’s College of Veterinary Medicine. The scientists extracted DNA from preserved Apatosaurus fossils, which were on display at the university’s museum of natural science,” it reads. “Once the DNA was harvested, scientists injected it into a fertile ostrich womb.”

The article was published on News-Hound.org, a website that frequently publishes hoax news stories.

The fake report also doesn’t offer any sources, and no legitimate media outlets have covered the cloning of a dinosaur. If scientists actually cloned a dinosaur, it would surely be top news across the world.

The image used in the body of the article appears to be a baby marsupial of some kind. “The Newshound article’s photograph of the baby dinosaur is actually a picture of a baby kangaroo published by an Australian community group to accompany an article about rescuing injured macropods (kangaroos and wallabies) where it is shown as an illustration of an unfurred joey (newborn kangaroo),” says hoax-debunking site Snopes.com.

The website Hoax-Slayer says that NewsHound publishes all sorts of fake news articles.

“The fake report originates from NewsHound, a publication that seemingly specializes in publishing all manner of nonsense disguised as news. In another ‘news’ story, it regurgitates the absurd claim that an upcoming ‘planetary alignment’ will decrease Earth’s gravity. And, in yet another, it publishes an old hoax about KFC changing its name because it no longer users real chicken. In short, nothing published on the site should be taken seriously,” Hoax-Slayer says.

Regarding the Apatosaurus species referenced in the article, scientists previously called them Brontosaurus. It is a genus of sauropod dinosaur that lived between 154 million and 150 million years ago.