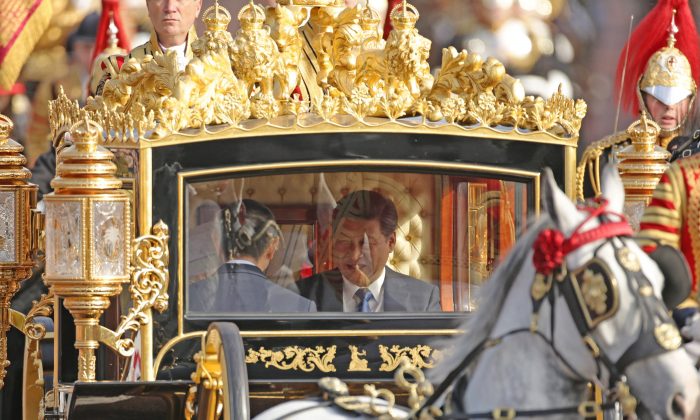 Chinese Communist Party leader Xi Jinping and Queen Elizabeth II ride in the Diamond Jubilee State Coach along The Mall after a ceremonial welcome on his first state visit to the UK in London on Oct. 20, 2015. (Yui Mok/WPA Pool/Getty Images)
China

UK puts Chinese investment ahead of human rights and national security, earning praise from Beijing as a model partnership
By Matthew Robertson

Since he arrived in the United Kingdom on Oct. 20, Chinese leader Xi Jinping has been feted like a visiting king. With the most pomp that the U.K. can muster, Xi was welcomed by the cavalry, walked down the red carpet with the queen, and was treated to a sumptuous state dinner.

Prime Minister David Cameron and Chancellor of the Exchequer George Osborne have made elaborate efforts to send a message that investment from China comes first—above human rights concerns, and even ahead of national security considerations.

A number of investment and trade deals were struck: including allowing Chinese state-owned companies to play a role in building the U.K.’s nuclear power plants. Concerns from the intelligence services have been sidelined.

In all this, the U.K. has been strongly rebuked by analysts across the spectrum, for what they see as its unnecessary sycophantism and lack of principle in groveling after Chinese money.

James McGregor, a well-known business consultant and author, characterized the U.K. approach as acting like a “panting puppy.” He added, in an interview with BBC, “China does not respect people who suck up to them.”

China may not respect the U.K., but according to an analysis of official newspapers, sucking up is just the way China likes it.

China’s own official and semi-official newspapers have been awash with praise for the U.K. and its China policies over the last few days.

China News Service, the regime’s mouthpiece for external propaganda, counseled that U.K. parliamentarians ought to “take the long view, continue being vigorous promoters of China–U.K. relations, be contributors to China-U.K. friendship, be supporters of cooperation …”

The structure and relationships of the great powers are going through a reshuffling.
—  Phoenix Television

“From Buckingham Palace to the English Parliament, the sounds of friendly cooperation resonated throughout the United Kingdom,” Xinhua wrote. “From the lively ‘golden age’ in relations between the two countries, to the 103-gun salute for China, the enthusiasm in bilateral relations was unforgettable.”

Even the U.K.’s Ministry of Defense struck a similar tone, “Weeks of preparation went into the events in London, which involved seven military bands and 10 military units.”

The Ministry of Defense noted that the timing was “impeccable,” with the gun salutes fired “at the precise moment the president alighted from his car and placed his foot upon the first step of the Royal Pavilion at Horse Guards.”

Christopher Ford, a scholar and the author of two books on Chinese foreign policy thought, says this matches identically the Chinese state’s vision for how other states ought to treat it.

“Foreign validation is eagerly sought by the Party-State regime and even the most ambiguous or arguable sign of Western deference to China is always played up in official propaganda,” he wrote in an email.

“Chinese leaders are clearly delighted to see the power whose gunboats defeated the Qing Dynasty so easily in 1842 now tripping over itself in a diplomatic rush to embrace the Middle Kingdom,” he continued.

One of the recurring slogans in the official reportage was that the relationship with the United Kingdom was now an exemplar of a controversial idea of how China relates to the outside world.

The idea, called the “new model of great country relations” has been eyed warily by the Obama administration. Experts said that its surface vagueness belies a demand that other countries defer to China’s interests in key areas, like territorial claims in the South China Sea, even at the expense of their own core values.

But, according to a commentary in the Party’s theoretical journal Seeking Truth, “China–U.K. relations have become a paragon of the New Model of Great Country Relations.”

This embrace of the United Kingdom, whose stature as a player on the international stage is a shadow of what it was during the World War II era, seems to be related to its being rebuffed by the United States, according to Xia Yeliang, a scholar of China at the Cato Institute in Washington, D.C.

There is nothing in the world that is more moving than beautiful feelings.
—  Xinhua

“China has always wanted to establish a so-called major country relationship with the United States. What it means is that China isn’t going to just follow the rules anymore, but make the rules. China thinks that only big countries should make the rules, and have more of a say than other countries,” Xia said in a telephone interview.

When Xi Jinping visited the United States recently, though, the reception didn’t seem especially fitting for what China hopes to get out of a “major country” relationship.

The Obama administration almost called off the trip, it was reported, because of exasperation about China’s vast campaign of cyberespionage.

There were also murmurs all along about the U.S. Navy conducting freedom of navigation operations in the South China Sea, where the Chinese military has claimed territory by building islands and constructing military bases atop them.

Xi’s entourage was also regularly subject to protest banners, and was at least once stopped by them. “The Chinese found it embarrassing,” Xia said.

The reception in the U.K. formed a sharp contrast. The groups mobilized to chant for the PRC drowned out opponents, and the U.K. government’s tone was compliant and cooperative.

U.S. officials have been troubled by the U.K.’s official shift. “The thing that upset us was that it was done in almost zero consultation with the U.S.,” a former administration official told the Financial Times. The United States and the United Kingdom are still major intelligence and military allies, but there are indications that even this could change.

China appears to covet just such a possibility. “In England’s diplomatic policies orienting toward China can be seen the reconfiguration of the global order,” declared a piece by the editorial board of Phoenix Television, a pro-Beijing media company with ties to Chinese intelligence. “The structure and relationships of the great powers are going through a reshuffling.”

All this even earned the U.K. the coveted sobriquet of being a “zhengyou” of China, as stated in the Phoenix editorial.

The term was first brought to the public by former Australia Prime Minister Kevin Rudd; it refers to a friendship in which the frank sharing of thoughts and criticisms is an important component. At the time, however, China did not much like the presumption that Australia could be a critical friend. Meanwhile, the U.K. has leveled no criticism at Beijing at all.

“It’s precisely because they don’t raise any criticism that they’re called a zhengyou,” said Xia Yeliang.

But China appears to have a different definition for the term than outsiders. “The wellspring of China–U.K. relations comes from the mutual understanding, support, and friendship of the people of the two countries,” wrote Xinhua. “There is nothing in the world that is more moving than beautiful feelings.”

For those who think the U.K. is selling out its long-term interests for short-term Chinese cash, Phoenix, the pro-Beijing broadcaster, has an answer to that: “Many media have criticized the U.K.’s diplomacy with China as ‘kowtowing,’ but in this there is a sour grapes mentality.”