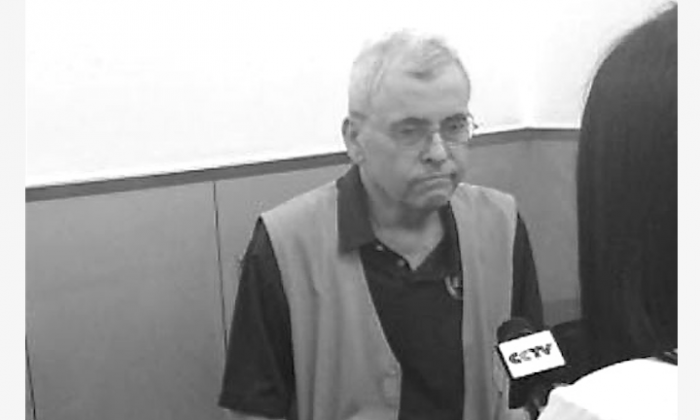 Peter Humphrey of ChinaWhys, a business risk consultancy in China, is interviewed by China Central Television while awaiting trial. Humphrey and his wife, Yu Yingzeng, were prosecuted on July 14 for collecting private information of Chinese citizens—but the case seems to have a shady political background. (Screenshot/Beijing Times)
China

British Private Eye in China Prosecuted for Knowing Too Much

As a private investigator for over a decade in China, it was Peter Humphrey’s job to find out secrets. But after he was hired by the British pharmaceutical company GlaxoSmithKline in April of last year, he seems to have uncovered secrets of the wrong kind.

Now Humphrey and his wife, Yu Yingzeng, appear to be embroiled in a political prosecution involving allegations of GSK employees engaging in widespread bribery in China, and a shady sex tape that may have been used to blackmail the company’s management.

Humphrey and Yu, British and American citizens respectively, were indicted by prosecutors in Shanghai on July 14, nearly a year after they were arrested. They are being charged with buying and selling the private information of Chinese citizens through their risk advisory firm ChinaWhys Co. Ltd, and will be tried likely in secret in August—but that seems far from the whole story.

Soon after the arrest last August, Humphrey and Yu were hauled onto China Central Television, the state mouthpiece, making a self-confession in front of the camera. “I am very regretful for what we did, and I apologize to the Chinese government,” Humphrey said, his shackled hands clasped together at his chest. The public humiliation and lack of due process were widely noted by observers.

Nevertheless, Chinese official propaganda channels have run with the story—and their account differs markedly from that of Western media reporting from China.

In a police lockup in Shanghai recently, Yu and Humphrey were interviewed by journalists affiliated with the state-run Xinhua News Agency—along with CCTV, apparently the only media agencies given access to the two. Their own son has been denied visitation rights.

Humphrey even “proactively,” the report said, “gave a solemn apology in both Chinese and English.” He admitted that their actions “were actually against the law… we regret breaking Chinese law, and we apologize to the Chinese government and other people who we have harmed.”

Peter Humphrey has a long history in the China game: he speaks fluent mandarin, is spoken of highly by former colleagues, and headed up Kroll Associates’ China branch for a number of years.

The precise relation in which the GSK investigation stands to the prosecution of Humphrey and Yu is not clear. When they were first arrested last year, no mention was made of GSK. But in the interview with state journalists, Humphrey explained how he was hired by the firm, and how, when a few months later the news emerged that GSK was under investigation by the regime for bribery, he was “extremely shocked,” and felt that he had been “tricked” and “used” by Mark Reilly, the former GSK chief that hired him.

It was in the course of running the investigation for GSK that Humphrey illegally followed people, took photographs, and obtained personal information that he and Yu are now being prosecuted for, Xinhua claims.

But state media reports never touched on the most intriguing part of the whole case: the sex tape that was sent to GSK executives, showing Mark Reilly, the former GSK chief in China, and his girlfriend, filmed in his apartment without his knowledge. According to the Financial Times, Humphrey was actually hired in order to find out who had sent that video to the company’s executives.

GSK in a July 3 statement to the press said explicitly that Yu and Humphrey “were not hired to investigate the substance of the allegations of misconduct made by the whistleblower.” They had in January 2013 already established an internal investigation into allegations of giving kickbacks to doctors, after receiving a tip off by a whistleblower.

Instead, Humphrey and Yu were approached to look into a “serious breach of privacy and security” related to Mark Reilly, the former GSK chief.

That breach was the sex tape of Reilly and his Chinese girlfriend, filmed in his apartment by a hidden camera without his knowledge, GSK executives told the Financial Times in June.

The tape was sent to top executives at GSK, including the chief executive, potentially as part of an attempt to extort the company, or potentially as part of a campaign of revenge by a jilted former employee. The email included the allegations that GSK employees were bribing Chinese doctors to prescribe GSK drugs, and greasing the palms of officials to make business run more smoothly.

There is a character in the background that provides a potential link between Humphrey and Yu’s investigation and the trouble they got into: Vivian Shi, 49, “a forceful, elegant Chinese woman,” according to the Sunday Times, who used to head up government relations for GSK in Shanghai. After she was fired from the company 18 months ago, the trouble began.

According to the Times, Humphrey and Yu were hired to see whether the secret sex tape was part of a plot by Vivian Shi, potentially to get back at the company for firing her, or for other reasons. She is understood to be well connected in China, her family part of the Shanghai’s Communist Party officialdom.