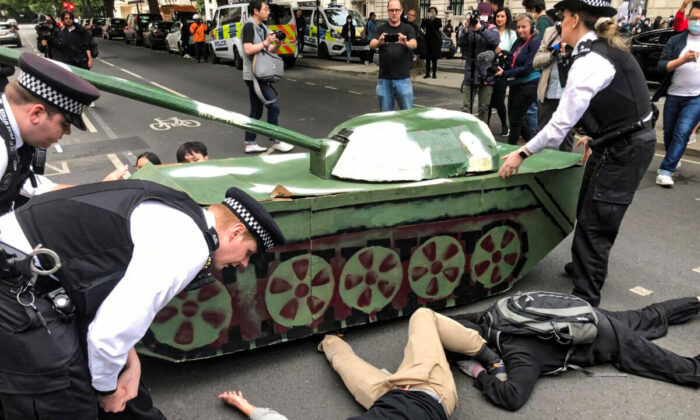 Hongkongers who fled the suppression of freedoms in their home city took part in an annual candlelit vigil outside the Chinese Embassy in London on Saturday to mark the 33rd anniversary of the Tiananmen Square massacre.

Over 2,000 people lit candles, listened to speeches—including recordings from mothers of the thousands of 1989 victims—and held a minute’s silence in what was believed to be the biggest remembrance event outside of the Chinese-speaking world.

Several demonstrators temporarily blocked the road outside the building in Portland Place, symbolically lying under the model tank painted with “never forget June 4” in Chinese and daubed in red paint to signify blood.

“It’s not enough to just have speeches every year. We need the demonstrations to be louder and bolder if we are to protect the freedoms the CCP wants to take from everyone, not just from the Chinese in mainland China and Hong Kong but here in your country too,” Hong Kong-born protester John Leung told The Epoch Times, referring to the Chinese Communist Party.

The annual remembrance memorial in London has grown in size over the past two years in part because of the arrival of Hongkongers seeking sanctuary in the UK under the British National (Overseas) program, which was drawn up in 2020 after Beijing imposed a national security law following mass dissent in the former UK colony.

Tens of thousands have already relocated to the UK and government officials estimate more than 320,000 people could take up the offer within five years.

The new arrivals who attended on Saturday gave this year’s memorial event a more strident atmosphere.

Many displayed Hong Kong independence and democracy flags and banners, and some wore masks to protect their identity, such is the fear among some that CCP agents have infiltrated their ranks.

“It is not worth the risk. I have my family—my mum, dad and brother—and friends back there, and I know that if they can identify me, the CCP will alert agents to intimidate them. We have escaped Hong Kong and yes, we can still protest. But we have not escaped the fear,” said a mask-wearing woman who gave her name as Shih.

‘They Will Never Kill Democracy’

Muslim and Tibetan demonstrators were also present and held up banners demanding an end to the persecution of Uyghurs in China’s Xinjiang province, and freedom for Tibet.

One of the main organisers, Yau Man Chun, a former Hong Kong Sha Tin District councillor who fled to the UK fearing arrest, led the rally-goers in chants including “Free Hong Kong,” “Free the Uyghurs,” and “End the CCP.”

Yau, who left for the UK eight months ago, told The Epoch Times: “The Chinese Communist Party has become a global power and uses it influence to stamp out freedom. We have to show them they will never kill democracy.”

Shao Jiang, a survivor of the 1989 Tiananmen massacre who lives and works in exile in London, described in a speech how he fled the tanks and went back to his Beida University dorm in Beijing to change his T-shirt which was covered in the blood of his fellow students.

He later told The Epoch Times: “It would be very difficult for the students in today’s China to rise up like we did. Such is the CCP’s control, it would be very difficult to organise. So that is why civil society and democratic countries like the UK should be supporting at grassroots level to help the younger generations understand what happened during the Tiananmen Square massacre.”

Among those speaking was Ma Jian, the celebrated dissident writer living in exile in the UK, and Benedict Rogers, the co-founder of UK-based human rights group, Hong Kong Watch.

Rogers described how the CCP’s new national security law asserts sweeping extraterritorial reach, and how he is being sought by Beijing for “colluding with a foreign country or with external elements to endanger national security.”

In 1989, the CCP showed its true colours “not for the first or last time,” he told the memorial gathering.

Rogers compared the remembrance of the Tiananmen Square massacre with the British Queen Elizabeth’s Platinum Jubilee celebrations which were also taking place in London.

He said: “These are two starkly opposite anniversaries. One is a celebration of values, of public service, devotion to a country and its people, of love and compassion … But this anniversary that we’re commemorating right now is the exact opposite.”

He added: “We are mourning bloodshed and terror—but we also celebrate the bravery and devotion of those who gave their lives [on June 4, 1989]. We contrast the styles of leadership over almost the same time period, 70 years.

“But the CCP represents a hatred of freedom, a threat to life, an assault to human dignity, and a repression that all of us should continue to fight.”

On the eve of the anniversary, a Tiananmen-related video was projected onto Tower Bridge in London.

Slogans such as “Free Hong Kong,” “Free Tibet,” and “Free Uyghurs” were also shown on the iconic bridge, which is close to the new Chinese Embassy at Royal Mint Court.

Chinese Embassy staff are in the process of moving to the larger premises in the east of the city, which will become China’s largest overseas mission.

The Epoch Times has contacted the UK Chinese Embassy for comment.