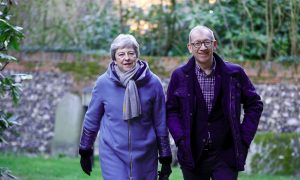 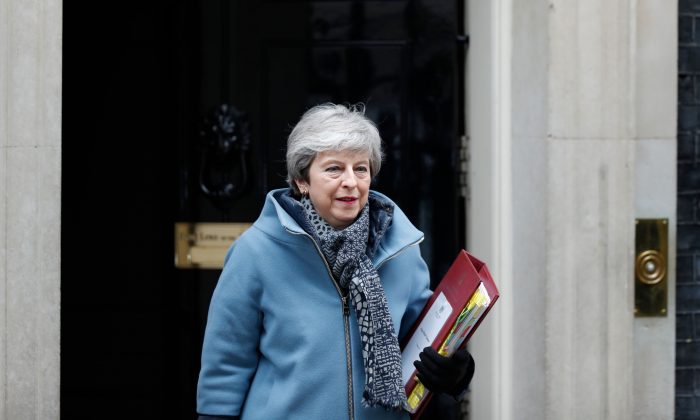 LONDON—British Prime Minister Theresa May has said she is willing to resign if lawmakers in her party back her Brexit deal.

“I am prepared to leave this job earlier than I intended in order to do what is right for our country and our party,” May told a meeting of Conservative Party lawmakers on March 27.

“I ask everyone in this room to back the deal so we can complete our historic duty—to deliver on the decision of the British people and leave the European Union with a smooth and orderly exit.”

May’s statement comes as she attempts to persuade lawmakers to back her twice-defeated Brexit deal.

If her deal does finally pass, it will trigger a leadership contest, although May has not set a date for her departure.

The government is now expected to bring the deal back to Parliament for a third vote on March 29.

At a meeting over the weekend of March 23, Brexit-supporting lawmakers like Jacob Rees-Mogg reportedly told May she would need to lay out a timetable for her resignation.

Despite the tight time frame, lawmakers were still debating on March 27 the sort of divorce deal the UK should adopt.

Oliver Letwin, a 62-year-old Conservative former cabinet minister, said if May was able to get her deal approved this week, then Parliament would stop searching for an alternative.

“There has been no insurgency here,” Letwin said.

At this late stage, it’s still unclear when, or even if, the UK will leave the EU.

Eight options have been debated, including the possibility of a public vote on any Brexit deal that Parliament might pass.

On March 23, an estimated 400,000 people marched through London to call for a “People’s Vote” on the final Brexit deal, one of the largest demonstrations ever in the UK.

Other options debated in Parliament included revoking Article 50, which would mean government possibly voting on a no-deal Brexit, or leaving the EU without a deal entirely.

“This is not about the number of votes precisely cast for one motion or another,” Letwin said. “It’s about whether when we look at the results as a whole … we get enough data to enable us to have sensible conversations about where we can go next. That is what I think would constitute a success here.”

Opponents of Brexit say it could split the European Union, making the bloc weaker in the face of powers such as China and Russia. It also would cut Britain off from its trade partners.

May’s deal was defeated in Parliament by 149 votes on March 12 and by 230 votes on Jan. 15. She wants Britain to leave the single market and customs union as well as EU political bodies.

But the so-called Northern Irish backstop has proven decisive in negotiations.

Described as an insurance policy or safety net, the backstop is a clause in the EU–UK divorce agreement that is meant to prevent the separation of Northern Ireland and the Republic of Ireland by a hard border.

May’s deal requires some EU rules to apply regarding the backstop, which has been difficult for Brexiteer lawmakers to accept.

Dozens of lawmakers are still opposed to May’s deal, so it remains to be seen whether her guarantee to step down as prime minister will win them over.

To succeed, she needs at least 75 lawmakers to change their stance.