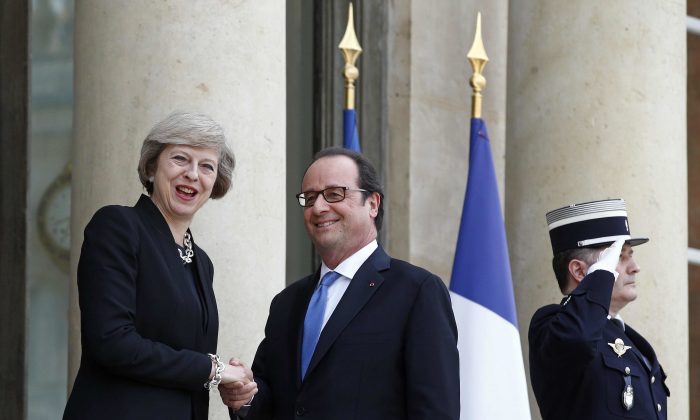 PARIS—British Prime Minister Theresa May says her country stands “shoulder to shoulder” with France following the deadly truck attack in Nice and gave reassurances that critical partnerships like intelligence cooperation with Paris and NATO obligations won’t be hurt by Britain’s exit from the European Union.

Speaking at a news conference Thursday in Paris with President Francois Hollande, May reiterated that Britain needs time to prepare negotiations for its departure from 28-nation bloc—and said London won’t invoke Article 50 of the EU treaty to start the process before the end of the year.

But “Britain remains open for business,” she said.

Along with counterterrorism efforts, “intelligence and security cooperation “is something that will always endure, even after Britain has left the European Union,” she said.

May, who took office last week, also said Britain “will continue to meet our NATO obligations, to spend 2 percent of our GDP on defense.”

Hollande pressed his message that Britain’s negotiations to leave the EU must not drag on, because “uncertainty is the greatest danger.”

He also said Britain cannot have it both ways once it leaves. There can be no freedom of movement of goods, of capital and of services “if there is not free movement of people,” he said.

May said she “expects” to be able to guarantee that French and other EU citizens now working in Britain can stay , but said British citizens’ rights in the EU would also need protected.

May met German Chancellor Angela Merkel on Wednesday, and said Britain won’t start exit talks until “our objectives are clear.”

Merkel struck a conciliatory tone, saying “nobody wants a long-term stalemate” but adding it was reasonable to give Britain time to prepare its EU exit carefully.