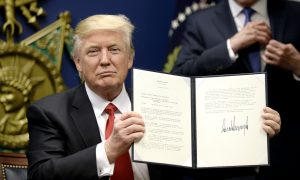 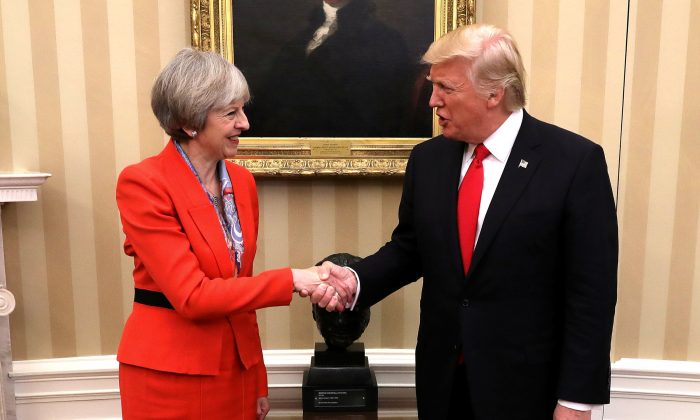 May left Washington after a 24-hour visit as Saturday’s British newspapers splashed front-page photos of the two leaders holding hands as they walked at the White House before a strikingly collegial news conference.

May wanted her meeting, Trump’s first as president with a foreign leader, to revitalize the trans-Atlantic “special relationship.” She got her wish—delighting those who believe Trump’s presidency will be good for Britain.

She flew home—after a stop in Turkey Saturday to meet President Recep Tayyip Erdogan—with Trump’s commitment not to abandon NATO, his praise for what he called “this most special relationship” and—a prize she had eagerly sought—the first steps toward an early trade deal with Britain once it leaves the European Union.

Britain can’t begin formal negotiations with other countries until it actually leaves the bloc, likely in 2019 at the earliest. But May’s office said Saturday that she and Trump had agreed to start high-level talks and joint working groups immediately to ensure “a seamless transition to a new bilateral relationship.”

Trade between the two countries is already worth 150 billion pounds ($188 billion) a year, and May said a future trade deal “could provide huge benefits to our economic muscle and will give businesses additional certainty and confidence.”

Trump did not come away empty handed from the meeting, either. He gets the seal of approval from a generally well-respected British prime minister. And there’s an invitation from Queen Elizabeth II to come for a state visit later this year—a treat for a president with Scottish roots and a taste for opulence.

So there was satisfaction from May’s team aboard her RAF Voyager jet at how well the hastily arranged trip had gone.

May also praised Trump’s “stunning” election victory and declared that they shared a commitment to make government serve “working people.”

Trump, meanwhile, extolled Britain’s vote to leave the EU, saying Brexit would be “a tremendous asset and not a tremendous liability.”

Those comments and the warmth of the visit drew approval from the pro-Brexit side of Britain’s press.

“It was one of the most extraordinary days in the long history of U.K.-U.S. relations,” said the Daily Mail under the headline “Love-In at the White House” and a picture of the hand-holding moment.

May’s office said Trump offered his hand in a chivalrous gesture as the pair approached an unexpected ramp, and she took it.

The trip will provide images for countless future stories about the trans-Atlantic bond. As well as the shoulder-to-shoulder press conference, May got a handshake in the Oval Office beside a bust of Winston Churchill that has become a minor obsession for sections of the British press since it was removed from the oval office by President Barack Obama. Trump restored it to a prominent place beside the Oval Office fireplace.

While May was in town the White House announced that Trump would speak by phone with Russian President Vladimir Putin Saturday, amid speculation he could be preparing to lift U.S. sanctions over Ukraine. May said Britain wants to see the sanctions stay in place.

And at the news conference with May, Trump repeated his belief that waterboarding works, which he said was “just short” of torture—though he said he would defer to Defense Secretary James Mattis, who thinks otherwise. Britain, May stressed during the trip, is firmly against torture.

An Inspirational Walk Through the Reagan Library

May had scarcely left when Trump issued an executive order barring all refugees from entering the United States for four months and imposing a 90-day ban on people from seven Muslim-majority countries.

On the whole, May emerged from the joint appearance looking confident and controlled. Trump, too, was notably calm and measured in her presence.

May said Trump has assured her he was “100 percent” behind NATO, a body he once called “obsolete.”

May’s office told reporters that warm conversation had flowed during the pair’s working lunch—and that Trump told an aide to keep the menu card so he could remember the special occasion.

Downing St. said conversation turned to Margaret Thatcher and Ronald Reagan, and Trump told May he wanted their relationship to be “even better” than that famously close and productive partnership.

At the press conference, Trump said he was confident the pair were going to get along.

“I am a people person,” Trump said. “I think you are also, Theresa.”