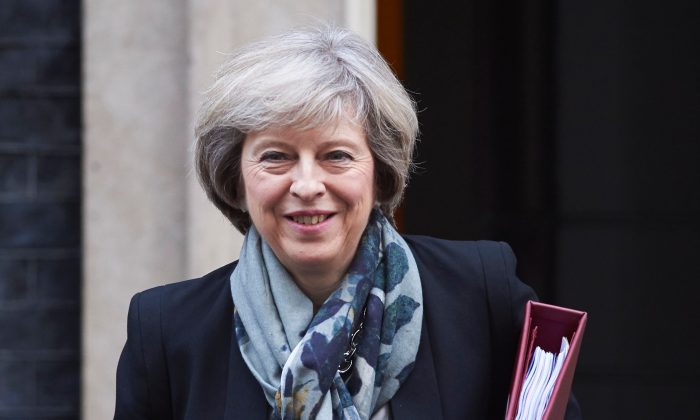 LONDON—British Prime Minister Theresa May said Sunday she plans to discuss free trade and the importance of the NATO military alliance when she meets with President Donald Trump in Washington.

The White House’s invitation for May to meet with Trump on Friday was seen in Britain as affirmation that Trump values the vaunted “special relationship” between the United States and its longtime ally across the Atlantic.

She told BBC’s Andrew Marr that the Trump team is interested in discussing a new trade arrangement with Britain.

Any national leader would do the same when deciding whether to sign a trade pact, May said.

Britain sees a future trade agreement with the United States as vital as the country prepares to leave the European Union. However, Britain’s desire for increased trade could clash with Trump’s protectionist stance.

May said she would also raise the value of the NATO military alliance during the meeting. She called it the “bulwark” of Europe’s defense system.

Trump has rattled European allies by suggesting NATO is “obsolete” and that the United States might not come to the aid of countries that don’t meet targets for their own defense spending.

May maintained that Trump understands NATO’s vital role. European leaders worry about a watering down of the NATO role given the increasingly aggressive actions by Russia in recent years.

UK’s May Signals Clean Break With EU: No Partial Membership

The prime minister didn’t directly answer questions about whether she will use Friday’s meeting to challenge Trump over his comments about women. May criticized crude remarks of his that surfaced during the presidential campaign.

But she said she would speak out if she finds his future behavior or comments “unacceptable.” May said she has a long track record promoting equal rights for women, adding that she is proud to be Britain’s second female prime minister.

“When I sit down, I think the biggest statement that will be made about the role of women is the fact that I will be there as a female prime minister, prime minister of the United Kingdom, directly taking to him about the interests that we share,” she said.

British officials say May will also speak to Republican senators and representatives at a retreat in Philadelphia.