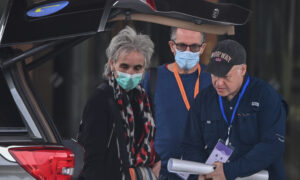 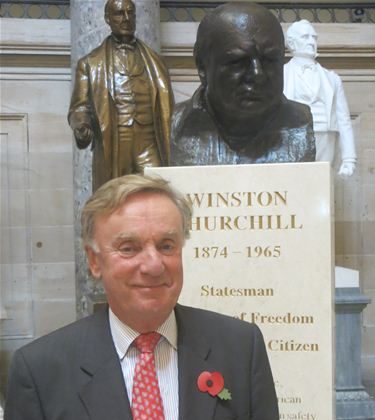 Sir Richard Ottoway in front of the bust of Winston Churchill at the U.S. Capitol, Washington, in an undated photograph. Ottoway was recently told by a Chinese diplomat that he would not be allowed into Hong Kong if he attempted to enter the region. (Courtesy of the office of Sir Richard Ottoway MP)
China

A group of British members of parliament have been told by the Chinese Embassy in London that they won’t be allowed into Hong Kong if they attempt to travel there as part of their inquiry into Hong Kong’s autonomy, according to reports.

Sir Richard Ottaway, chair of the Foreign Affairs Committee which is heading the investigation, described the move by China as “overtly confrontational” in an interview with the BBC.

Hong Kong is a special administrative region of the People’s Republic of China, and is supposed to enjoy a “high degree of autonomy,” according to the terms agreed upon between Hong Kong, China, and Britain upon the handing over of the colony from British to Chinese authorities in 1997.

The basis for Hong Kong’s existence as a semi-independent region was set out in the Sino-British Joint Declaration, and the Basic Law, which bestows the city with an independent legal system and an ostensibly free press, among other freedoms.

That bargain has come under pressure recently, with moves by the Party to restrict Hong Kong’s electoral freedoms, and, in response, tens of thousands of Hong Kong young people flooding the streets calling for “genuine universal suffrage.”

Ottaway was on Friday told by the deputy Chinese ambassador to Britain, Ni Jian, that “if we travel to Hong Kong we will be refused entry,” according to the Financial Times.

He plans to call an emergency debate in Parliament about the ban, which is being seen as a significant overstepping of the bounds of China’s control over Hong Kong.

Hong Kong is supposed to have a separate and independent immigration system from China—but the threat by the Chinese ambassador indicates that it is ultimately under Chinese influence and control.

There have in years past been isolated incidents of unusual visa denials—such as from Falun Gong practitioners traveling from Taiwan to Hong Kong to protest the persecution of their practice in China—but never before in such a high-profile manner.

The inquiry set up by Sir Richard Ottaway was intended to examine, in part, whether the Chinese Communist Party had kept up its end of the bargain in maintaining Hong Kong’s autonomy under the One Country, Two Systems model. It is likely that the denial of their entry to the region will feature prominently in their final assessment of the matter.