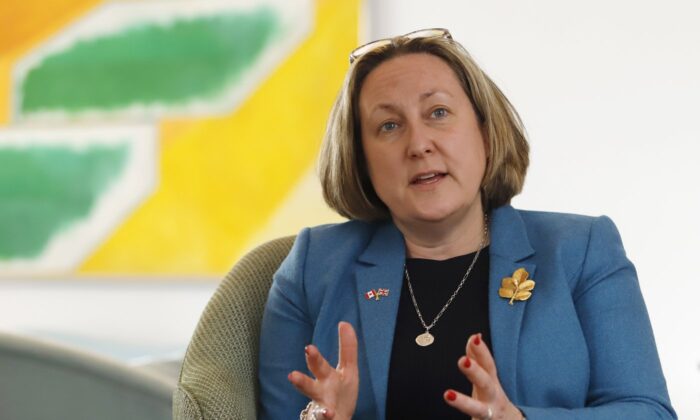 British trade secretary Anne-Marie Trevelyan poses for a photo after an interview in Ottawa on March 23, 2022. (The Canadian Press/Patrick Doyle)
Canada

Britain’s trade minister says she hopes her country can finalize a formal free trade agreement with Canada within a year now that negotiations are set to start in earnest.

U.K. Trade Secretary Anne-Marie Trevelyan offered that timeline in an interview with The Canadian Press after her arrival in Ottawa.

Trevelyan is set to announce the formal start of the talks with Canada on Thursday with Canadian counterpart Mary Ng.

“I would hope that, you know, within a year would be realistic,” Trevelyan said at the British High Commissioner’s residence in Ottawa. “We’re both keen to get on (with talks), but substance over speed is always my view.”

Britain and Canada have already negotiated an interim trade agreement to replace the broader Comprehensive Economic and Trade Agreement, or CETA, that Canada negotiated with the European Union.

Britain’s decision to leave the EU after its Brexit referendum meant that it was forced out of CETA at the end of 2020. In November 2020, Britain and Canada inked the interim deal that preserved the main elements of CETA, including the elimination of tariffs on 98 percent of Canadian exports to Britain.

Trevelyan says it is critical for Britain to strike deals with Canada as well as gain entry to the 11-country Pacific Rim trade pact known as the Comprehensive and Progressive Agreement for Trans-Pacific Partnership, or CPTPP.

Canada is a founding member of the CPTPP – an alliance that former U.S. president Donald Trump unceremoniously withdrew his country from in 2017.

Trevelyan has just come from the United States, another key partner with whom Britain is looking forge a bilateral trade deal. Britain needs to recreate its international trading relationship because that was a task that fell under the bailiwick of the EU when it was a member.

Leaving the EU forced Britain to create a trade department literally from scratch, and Trevelyan was eager to point out that she had already helped craft two new deals for her country with Australia and New Zealand in recent months.

Trevelyan said she and Ng are focused on women’s empowerment and providing them more access to finance to help them grow small- and medium-sized businesses.

That is particularly significant, she said, because the COVID-19 pandemic has had a disproportionately hard effect on women that the new deal could help address.

“We want to make sure we can give them the tools they need but also that we shift the dial on things like access to finance for women. There is this huge gap in the U.K.,” she said.

“If we could rebalance female business at the same level of investment as men’s, we’d add something like 250 billion (U.K.) pounds to the economy. There is a massive gap there.”

Trevelyan also said she wants to see an increase in Canadian investment in Britain, but she does not have a specific target in mind.

The Russian invasion of Ukraine has forced Britain to join allies, including Canada, in imposing sanctions on oligarchs loyal to President Vladimir Putin, many of whom were heavily invested in London.

Trevelyan said Britain was poised to follow Canada’s lead this week and revoke Russia’s most-favoured nation trading status, which will lead to 35-per-cent tariffs on all Russian goods including the “luxury goods” that Putin’s oligarchs are so fond of.

Trevelyan said Canadian and British business are “very strongly taking the moral choice to step away from Russian trade, and that’s hard on our businesses” but that the joint action is necessary. She said Britain has now sanctioned 381 oligarchs.

Ng and Trevelyan also took part in a virtual G7 trade ministers meeting on Wednesday where they discussed further measures against Russia.

“At a time of increased global volatility and shifting geopolitical environments, it is imperative that Canada boosts its economic resiliency by strengthening relations with reliable partners and longstanding allies such as the UK,” said Goldy Hyder, president of the Business Council of Canada.

He said the interim agreement between Canada and Britain has served its purpose, but the time has come for “a more comprehensive and tailor-made deal with our third-largest export market.”