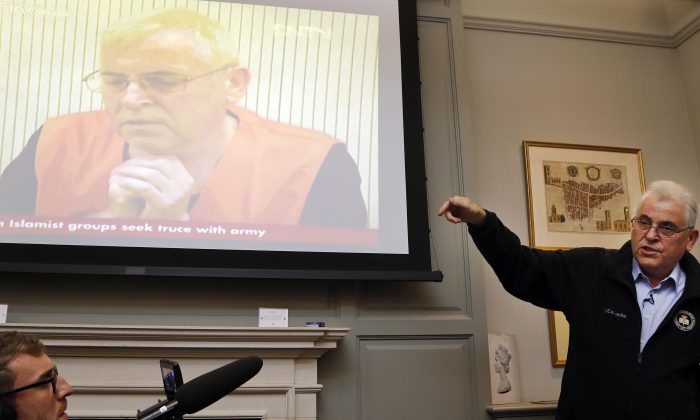 British investigator, Peter Humphrey, addresses the media in front of a screen showing him in a Chinese state TV interview, during a press conference in London, on Nov. 23, 2018. (AP Photo/Frank Augstein)
UK

LONDON—A British corporate investigator filed a complaint on Nov. 23 to U.K. regulators about China’s state-run broadcaster, saying its British license should be revoked because it aired his forced confession while he was imprisoned in China.

Humphrey and his wife, Yingzeng Yu, a Chinese-born U.S. citizen, spent two years in prison after being convicted of illegally acquiring personal information of Chinese citizens.

The couple, who ran a corporate investigation firm, had been hired on contract by pharmaceuticals company GlaxoSmithKline to look into a security breach, but became collateral damage when the Chinese authorities began investigating GSK’s alleged bribery practices.

The pair was shown separately on Chinese state television purportedly confessing their crimes, but Humphrey said it was done under duress and that he was sedated.

CGTN is available on free and paid television channels in Britain. The broadcaster is reportedly expanding its presence in Europe with a new studio and production center set to open in London by the end of the year.

Humphrey says he was forced to confess twice.

“It always happened after or amid a massive wave of international press coverage of our case, so it was part of a propaganda war,” he said.

Humphrey got help with his case from Peter Dahlin, a Swedish activist who was also detained in China and allegedly forced to confess on air after authorities cracked down on his human rights group.

“Many people think CCTV merely broadcasts these, they’re made by police and (the station is) forced to broadcast them,” but its journalists are “actively engaged” in these reports, Dahlin said.

By filing the complaint, Dahlin said they want to influence the broadcaster’s behavior, so it will “abide by basic standards, both regulatory standards in Britain but also journalistic ethical standards.”

Britain’s communications regulator, Ofcom, said it was assessing the complaint “as a priority” and would take “necessary enforcement action” if it found any rules had been broken.

In 2012, Ofcom revoked Iranian state-owned Press TV’s license following a complaint by Newsweek journalist Maziar Bahari that the station aired an interview with him while he was detained. Bahari said he was forced to do a scripted interview with his captors, who threatened him with execution.