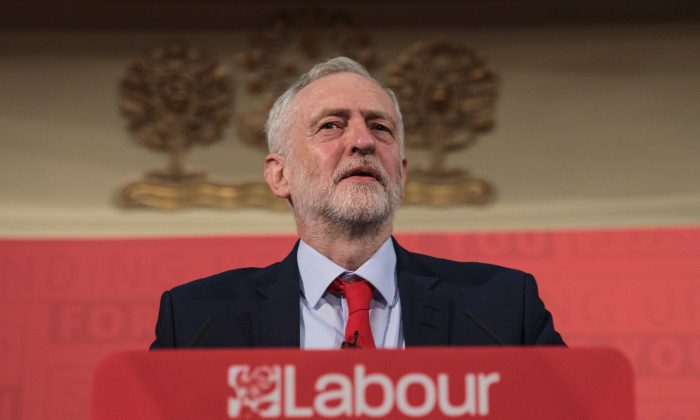 The three most prominent Jewish newspapers in the UK have warned that a government led by British Labour Party leader Jeremy Corbyn would pose an “existential threat” to Jewish life.

The joint editorial published on the front page of The Jewish Chronicle, Jewish Telegraph, and Jewish News declares, “United we stand.”

The papers said that until recently, the Labour Party was a natural home for the Jewish community, but now Labour has seen “its values and integrity eroded by Corbynite contempt for Jews and Israel.”

This is the single most astonishing front page we’ve run at @JewishChron in my decade here. It is totally without precedent. Our paper has been published since 1841. @JewishNewsUK and @JewishTelegraph are our rivals – in name, in business, and on stories pic.twitter.com/peRUPRnqIX

A Labour spokesman said the party recognized the concerns raised by the Jewish community but acknowledged there was a “huge amount of work to do” to build trust and confidence.

“The next Labour government poses no threat of any kind whatsoever to Jewish people,” the spokesman said. “The security and wellbeing of Jewish people is a priority for our party and in government we will always ensure schools, synagogues, and institutions are properly protected.”

The three papers say that Labour should adopt the International Holocaust Remembrance Alliance’s definition of antisemitism.

Last week, Labour’s National Executive Committee adopted a watered-down definition of anti-Semitism that the Jewish Leadership Council said would anger many Jewish people in the UK. It was also criticized by some of its own lawmakers.

The newspapers wrote, “Under its adapted guidelines, a Labour Party member is free to claim Israel’s existence is a racist endeavor and compare Israeli policies to those of Nazi Germany, unless ‘intent’—whatever that means—can be proved.”

It comes as British Labour politician Margaret Hodge reportedly called Corbyn “an antisemitic racist” in the House of Commons. Writing in The Guardian, Hodge criticized the “arrogance” displayed by the Labour leadership and attacked the party for not adopting the International Holocaust Remembrance Alliance’s definition of antisemitism.

Labour has been wrestling with accusations that it has been tolerant of antisemitism among some of its members, and in April, leaders of Britain’s 270,000 Jews organized a protest accusing Corbyn of failing to address their concerns.

The disarray over Brexit in Theresa May’s government has aided Labour, with the party taking the lead in some opinion polls.

The editorial added, “With the government in Brexit disarray, there is a clear and present danger that a man with a default blindness to the Jewish community’s fears, a man who has a problem seeing that hateful rhetoric aimed at Israel can easily step into antisemitism, could be our next prime minister.”

The three newspapers’ stance gained support from some politicians within the Labour Party.

Ian Dudley, a member of Parliament, wrote in a tweet that every member of the Labour Party “should be ashamed.”

Another member of Parliament, Anna Turley, wrote on Twitter: “Unprecedented and very upsetting. And fairly easy to begin resolving. Starting with the NEC [National Executive Committee] accepting the IHRA definition.”

Corbyn has previously apologized for what he called “pockets” of antisemitism in the party and promised to stamp them out.