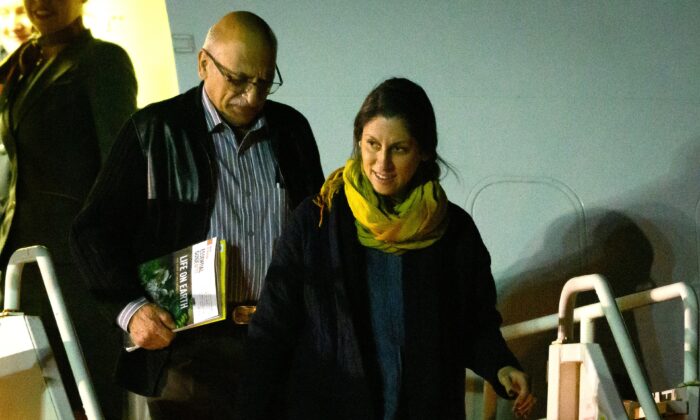 Nazanin Zaghari-Ratcliffe (R) and Anoosheh Ashoori, who were freed from Iran, disembark after landing at RAF Brize Norton, in England, on March 17, 2022. (Leon Neal/Getty Images)
UK

British-Iranian aid worker Nazanin Zaghari-Ratcliffe, who returned to the UK in March after spending six years in detention in Iran, has revealed she was forced to sign a “false confession” in front of a UK government official before she was allowed to leave Iran.

Zaghari-Ratcliffe, 43, a project manager with the Thomson Reuters Foundation, was arrested at a Tehran airport in April 2016 as she prepared to head back to Britain with her daughter after a family visit. She was later jailed after being convicted of plotting to overthrow Iran’s clerical establishment.

Two months after her return, Zaghari-Ratcliffe told the BBC that, immediately before boarding her flight to the UK, she was forced to sign a document “under duress,” admitting to the Iranian regime’s allegations.

On the day when she was to be freed, she said, she was taken to the airport by Iran’s Revolutionary Guards without seeing her parents.

“Instead I was made to sign the forced confession at the airport in the presence of the British government,” Zaghari-Ratcliffe told BBC Radio 4’s “Woman’s Hour.”

Iranian officials told her the UK had now settled a historic £400 million ($503 million) debt dating to the 1970s. The UK government accepted that it should pay the “legitimate debt” for an order of 1,500 Chieftain tanks, which was not fulfilled after the shah was deposed and replaced by the Islamic regime.

According to Zaghari-Ratcliffe, the officials told her she would not be allowed to get on the plane without signing the confession.

She said a British official was present at the time she signed the document, and the whole process was filmed by the Iranians.

The charity worker said she wanted people to know she had been forced to sign, to prevent the Iranian regime from using the confession for propaganda purposes.

“All the false confessions that we have been exposed to, they have no value. They are just propaganda for the Iranian regime to show how scary they are and they can do whatever they want to do,” she said.

The Labour politician said, “The foreign secretary must set out in Parliament what she knew about this shocking revelation and what consequences it could have for my constituent.”

A government spokesman said: “Iran put Nazanin Zaghari-Ratcliffe through a horrendous ordeal, right up to the moment she left the country.

“Throughout that time the UK government was working tirelessly to end her unfair detention, but it was always in Iran’s gift to release Nazanin and allow her to return to her family.

“We urge the government of Iran to end its practice of unfairly detaining British and other foreign nationals, and we will continue to work with international partners to that end.”