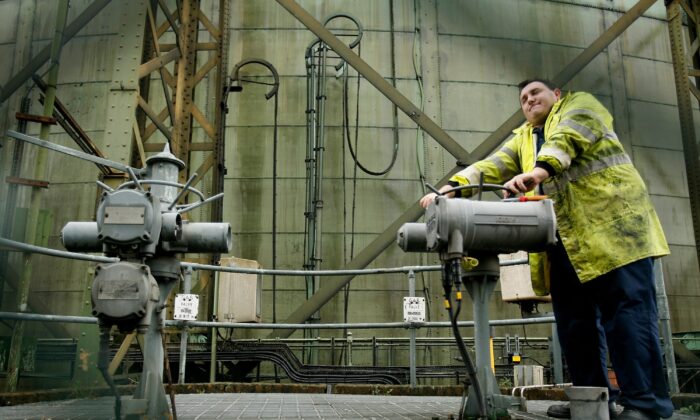 A worker attempts to open a gas valve below the structure of a gas storage tank in London on Oct. 10, 2006. (Daniel Berehulak/Getty Images)
Energy

Energy experts are warning that British industry could be hit by gas shortages this winter as the UK government insists it is “confident” there will be no shortfall.

The Department for Business, Energy and Industrial Strategy said it remained “confident energy security will be maintained.”

But one leading commentator, economist Paul Stevens, told The Epoch Times, “Industry and the manufacturing sector are going to be hit as gas shortages start to emerge.”

Another specialist on the natural gas sector spelled out three variables that need to converge if the country is to “get by.”

Jonathan Stern, a professor and distinguished research fellow at the Oxford Institute for Energy listed the criteria he believes need to be met if the UK is to avoid energy rationing: “If it’s a mild winter; if we go into recession (which it looks like we will); and if the Russians keep at least some gas flowing,” Stern said.

A recession would mean less energy used by industry though that would itself lead to other problems such as higher unemployment. But if all those criteria are satisfied, Britain might avoid having to ration gas or cut off some industrial customers, Stern said.

While not reliant on Russian gas like some continental European countries, the UK’s energy problems arise from being caught up in the global bidding frenzy stoked by the war in Ukraine.

“Everybody out there is trying to buy natural gas so the price has gone up dramatically,” said Stevens, an emeritus professor at the University of Dundee on the east coast of Scotland.

Around half of the UK’s gas supplies are from its domestic production in the North Sea. It also buys in around a third of its requirement from Norway as well as importing it from Qatar.

The United States is also now a major exporter to the UK of liquid natural gas (LNG) but a significant source in that supply chain was knocked out by a major accident at the Quintana Island liquefaction facility in Texas back in June.

“From the UK’s point of view, the issue is not so much an energy supply crisis as a macro-economic one,” Stevens said.

His comments come as Jonathan Brearley, the head of the UK energy regulator, Ofgem, admitted the situation was deeply worrying. “As a result of Russia’s actions, the volatility in the energy markets we experienced last winter has lasted much longer, with much higher prices than ever before,” Brearely stated in early August.

While there was a risk to gas supplies in industry, the threat to residential supplies at least seems lower.

Stevens explained that while you can have a gas engineer at a large factory plant to turn supplies off and on, that is not the case for hundreds of thousands of households or more.

British Gas researched in 1982 how long it would take to reconnect all the residential customers in a city as big as Birmingham if they lost their supply.

The answer was three years.

It means households are less likely to be affected by any rationing.

“In a way the implications are good news for residential customers,” Stevens said. “They’re going to be the last ones to lose gas supplies. But of course,” he added, “what’s going to happen is, supplies will disappear for industry.”

Stevens said there could be implications for manufacturing, metal smelting, or any industry using natural gas.

But a UK government spokesperson told The Epoch Times, “We have one of the most reliable and diverse energy systems in the world, ensuring households and businesses can be confident they will get the electricity and gas they need.”

The spokesperson said the government had also secured additional homegrown supplies through its renewable auction scheme.

Natural gas is moved around the world in two forms, either via pipeline or cooled at minus 162 degrees Celsius to liquid natural gas.

One paradox in any crisis is that, apart from Spain, Britain has the largest import capacity for LNG in continental Europe, but according to Stern “so little storage of gas in this country if we got into problems.”

There could also be another casualty in any crisis. Ireland is dependent on the UK for LNG. It has no import capacity of its own.

Asked whether supplying and receiving gas could be weaponised between a post-Brexit UK and countries in the EU—of which Ireland is a member—Stern said it was unlikely as it would lead to long-lasting hostility.

As part of the bigger picture, how economies in Asia perform will also impact the situation in the UK into winter and beyond.

Stern is worried about this.

“Twenty, even 10 years ago, when people like me were interested in what was happening in the U.S. and Japan it was academic if you were in the UK. Now everything impacts everything.

The recent heatwave and drought have also raised questions around energy security for the UK.

Britain buys hydroelectricity from Norway, which announced it is rationing all supplies and prioritising domestic customers.

More of a problem is the electricity Britain gets from France’s nuclear plants. It also “needs a lot of water … and an awful lot of the French nuclear capacity is out of action at the moment because they don’t have enough water,” said Stevens.

Nuclear in the UK was not a serious alternative, Stevens said, because it was not economic, had long lead times, and other renewables were so much cheaper.

Meanwhile the environmental pressure group Friends of the Earth is calling on the government in London to do more to encourage investment in onshore wind and solar farms as cheap energy that is fastest to build.

Jamie Peters of Friends of the Earth said the reliance on fossil fuels was itself driving the energy crisis and pushing up gas and oil prices.

“The solution lies in energy efficiency and investment in safe, clean, and affordable renewables,” Peters told The Epoch Times, suggesting the lifting of planning barriers hampering the development of onshore wind would be a step in the right direction.

Yet the front-runner in the race to replace the outgoing Prime Minister Boris Johnson has already set out her stall on solar energy.

Foreign Secretary Liz Truss recently told a leadership hustings she does not want to see farmers “filling fields with paraphernalia like solar farms.”

Stevens believes one of the reasons Russian President Vladimir Putin invaded Ukraine when he did was because he could see the energy transition to renewables was speeding up, meaning the leverage of Russian gas would wane.

“We’re in the middle of an energy transition, a switch away from hydrocarbon molecules to electrons,” the economist said.

For Stevens, the war in Ukraine and the pandemic will both have an impact on the rate of that transition away from fossil fuels. “It will eventually speed up but there will be a blip,” he said.