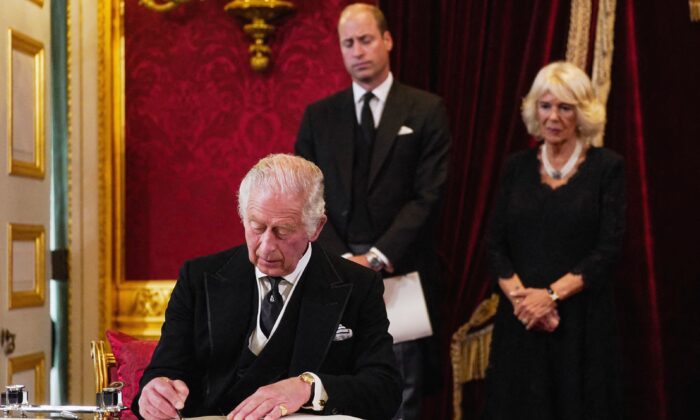 Britain's Prince William, Prince of Wales (C) and Camilla, Queen Consort (R) watch as King Charles III signs an oath to uphold the security of the Church in Scotland, during a meeting of the Accession Council inside St James's Palace in London on Sept. 10, 2022. (Victoria Jones/Pppl/AFP via Getty Images)
Australia

King Charles III has been officially proclaimed as Australia’s new sovereign during a ceremony at Parliament House.

The proclamation announcing the monarch’s accession following the death of Queen Elizabeth was read out by Governor-General David Hurley.

Australia’s Executive Council, which formally advises the governor-general, earlier met in Canberra to recommend the proclamation.

The governor-general said the council had a weighty responsibility.

“Australia is an unfinished product. It is now entering a new era,” Hurley said ahead of the meeting.

“Most Australians have not known a world without Queen Elizabeth II, her passing is the end of an era.”

The proclamation ceremony began with a procession of the Australian Defence Force followed by a welcome to country.

Following the proclamation, God Save the King was played, with flags raised to full mast.

An Indigenous spiritual dance then followed before a 21-gun salute rang out across the capital.

MPs and senators from across the political divide were also in attendance to watch the ceremonial proceedings.

Large crowds also gathered outside Parliament House to witness the proclamation, with some attendees waiting for more than an hour.

Prime Minister Anthony Albanese said there had been an outpouring of grief following the Queen’s death.

“Today, we mark formally the new head of state in King Charles III and in the proclamation, the first in my lifetime and the first in a majority of Australians’ lifetime, is an historic event.”

State governors will make their own proclamations in ceremonies around the country after the federal event.

Albanese also confirmed Australians would have a national public holiday to mourn the Queen.

The one-off holiday would take place on September 22, three days after the royal funeral in London.

Albanese said he had already spoken to all premiers and chief ministers about plans for the national day of commemoration.

The prime minister and Hurley will travel to London later this week to attend the funeral at Westminster Abbey.

Before then, the Queen’s coffin will be driven from Balmoral Castle to Scotland’s capital Edinburgh and be flown to London later in the week.

It will remain at Buckingham Palace before being taken to Westminster Hall to lie in state for four days, allowing the public to pay their respects.

Albanese said assistance has been given to 10 Pacific island nations that have connections with the Commonwealth to travel to London for the funeral.

Federal parliament, which was due to sit this week in Canberra, has been suspended following the death of the Queen.

The prime minister said the government would look to make up the days following the period of mourning.

“One of the days will be devoted to people being able to give their condolences on the passing of Queen Elizabeth,” he said.

Since the Queen’s death more than 13,700 condolences have been made online on government websites, while many more people have left floral and other tributes at government houses in Canberra and state capitals.