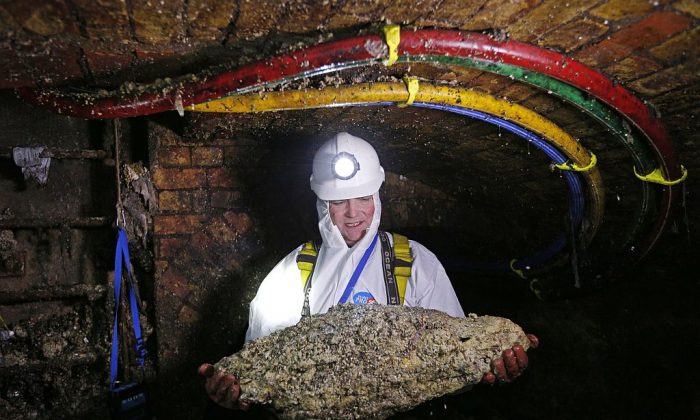 Tim Henderson, a "flusher" or trunk sewer technician holds a "fatberg" as he works in the intersection of the Regent Street and Victoria sewer in London on Dec. 11, 2014. (Adrian Dennis/AFP/Getty Images)
UK

The British government says it may ban wet wipes as part of a broader crackdown on plastic trash, in measures designed to protect the environment.

If they are outlawed, shoppers will no longer be able to buy them in their current form.

Wet wipes are mostly made of polyester and, when flushed down the toilet, build up in sewers, famously leading to what has been termed “fatbergs.” These giant objects form when wet wipes bind with fat from cooking oils, and are responsible for 93 percent of blockages in British sewers, according to trade body Water UK.

The microfibers in the wipes, which contain chemicals, can kill fish once they are released.

Clearing the blockages costs £100 million ($135 million) a year, according to the UK Environment Agency.

A spokesperson for the UK Department for Environment, Food and Rural Affairs (DEFRA) said in an emailed statement: “Through our 25 Year Environment Plan, we have a clear commitment to eliminate all avoidable plastic waste. There are a number of ways we can reach this ambition, including banning plastic items—as we have done with our microbeads ban—but also by working with industry to find suitable alternatives or encouraging behaviour change.”

The spokesperson continued: “Our focus for wet wipes is to work with manufacturers and water companies to develop a product that does not contain plastic and can be safely flushed. We are also continuing to work with industry to make sure labeling on the packaging of these products is clear and people know how to dispose of them properly.”

DEFRA is considering new taxes intended to reduce avoidable plastic waste, such as single-use items, according to The Independent.

Despite information campaigns, many people still flush wet wipes away. Indeed, many are marketed as “flushable,” although most industry bodies advise that no wet wipes should be flushed.

The slogan “pee, poo, and toilet paper” is widely used to indicate the things that can be safely flushed.

“The sheer quantity of these wet wipes shows the urgency of this problem,” said Debbie Leach, chief executive of Thames21, in a statement.

Thames Water, which supplies around three-quarters of London’s water, welcomed the development, with spokesperson Becky Trotman saying in an emailed statement, “Wet wipes combined with fat and oil create fatbergs and cause concrete-like blockages in our sewers, and we support any initiative to make sure they stay out of our network.”

The problem of blocked sewers is a global one, with The New York Times estimating that clearing cooking oil deposits cost the city $4.65 million in 2013–2014.

In Hopkins, Minnesota, officials were called to clear a blockage of supposedly flushable wipes and diapers that sent sewage pouring into the street in September 2017.

In Australia, a 1-tonne (1.10-ton) wet wipe blockage forming a 7-meter (23-foot) “snake” was pulled from a sewer in Newcastle, New South Wales, in April 2016. A spokesperson in Queensland said 120 tonnes of wipes are removed from the state’s system every year, reported the Australian Broadcasting Corp.

In the UK, various measures have been introduced to control the damage more broadly caused by plastic, including banning microbeads and introducing a charge for plastic bags. Other measures under consideration include a ban on plastic straws and cotton buds that have plastic stems.