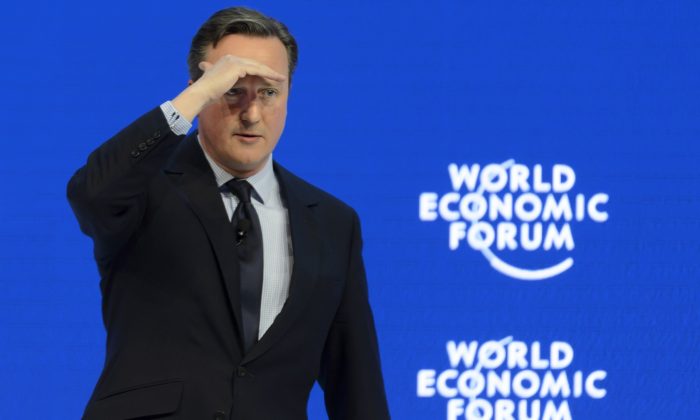 British Prime Minister David Cameron protects his eyes as he speaks during a panel session at the 46th Annual Meeting of the World Economic Forum, WEF, in Davos, Switzerland, Thursday, Jan. 21, 2016. (Laurent Gillieron/Keystone via AP)
Europe

DAVOS, Switzerland — Worries over a British exit from the European Union weighed on participants at the World Economic Forum on Thursday, with France’s prime minister warning that it would be a “tragedy” that could prove an inspiration to populists around the region at a time when many countries are contending with massive numbers of refugees.

British Prime Minister David Cameron said he’s in no hurry to hold a referendum on his country’s future in the EU, if a deal on his reform proposals doesn’t emerge at a summit of European leaders in February. But he insisted that his aim is to “secure” Britain’s future in a reformed EU, a stance that he says is the best outcome for both sides.

“If there’s a good deal on the table, I will take it,” he told an audience of mainly business leaders in the Swiss ski resort of Davos. “But if there isn’t the right deal, I’m not in a hurry. I can hold my referendum any time up until the end of 2017. And it’s much more important to get this right than to rush it.”

One of the major tenets of the manifesto of Cameron’s Conservative Party, which won a governing majority in last May’s general election, was a pledge to hold a referendum on Britain’s future in the EU by the end of 2017 after a renegotiation process.

Britain’s future in the EU is set to be the main discussion point a summit of the EU’s 28 leaders on Feb. 18-19. The thinking until very recently was that an agreement would emerge then, paving the way for a referendum in the summer.

The refugee crisis that has engulfed Europe over the past few months as people leave conflict zones, notably from Syria, has raised worries that a deal may not be achieved in time — for one thing a referendum date will need time to legislate. Many European issues are up in the air at the moment, including what to do with the Schengen Agreement that allows borderless travel across much of the continent.

Cameron laid out his four reform proposals, which he insisted were “not outrageous asks.” He said he wants to “hard-wire” competitiveness into the EU’s DNA, make sure non-euro countries like Britain aren’t discriminated by the 19 EU countries that use the euro currency, get Britain out of the idea of an “ever-closer union” and curbs on migration and benefits.

Since joining what was then known as the European Economic Community in 1973, Britain’s membership has often been strained. Over the past few years, a groundswell of opinion in the country thinks exiting the EU is the best option, especially at a time when many of its members are getting closer together, notably with the creation of the euro currency. In last May’s election, the U.K. Independence Party, which aims to get Britain out of the EU, won 4 million, or just under 13 percent of the total. Many supporters of Cameron’s Conservatives would likely vote for Brexit too whatever deal emerges.

While Britain has been at the forefront of efforts to create the European single market and led a series of foreign policy and development initiatives, there have been growing concerns of late over high levels of immigration particularly from eastern Europe and over the influence of the 19-country eurozone.

Mark Rutte, the Dutch prime minister whose country holds the rotating presidency of the EU, said he’s “fairly optimistic” that a deal can emerge in February but that’s he’s “not absolutely sure.”

Rutte, often referred to as Cameron’s best friend in the EU leaders club, said Europe needs Britain to remain in the EU as the country is outward-looking and trade-oriented, attributes that the stagnant economic region needs.

“If we achieve that, then this whole episode will have positive ending,” he told a panel on the future of Europe.

And French Prime Minister Manuel Valls went further, saying a Brexit would be a “tragedy and I’m saying this as a Frenchman.”

Valls said France will do everything it can so that Britain stays — but not under any condition.

“That’d be senseless,” he said. “I hope that the summit in February will at least help us to make decisive steps forward.”

A potential Brexit loomed large over discussions in Davos, especially at a time that Europe has so many issues to contend with, including the parlous state of many of its economies, terrorism and the sheer scale of the refugees crisis it’s facing — Germany alone took in over a million last year.

“Nothing could be worse than to see a member state to leave because it would be a signal to others and pave the way for more populism so we have a collective responsibility at this historic moment,” Valls said.