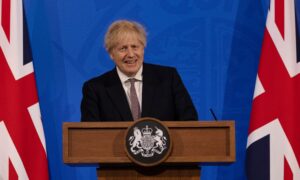 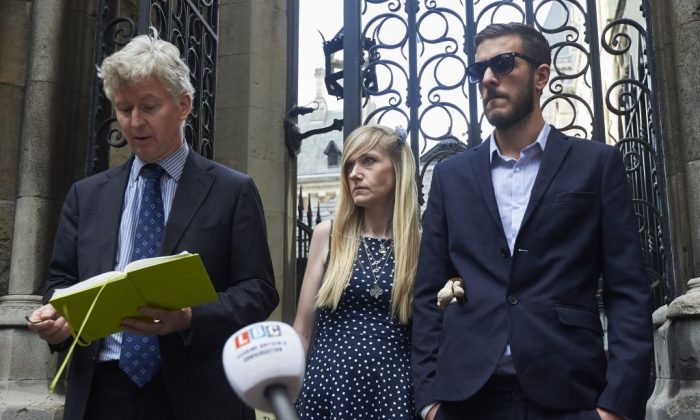 A spokesperson for the parents of terminally-ill, 10-month-old Charlie Gard, Chris Gard and Connie Yates delivers a statement to the media outside the High Court in London on July 10, 2017. (NIKLAS HALLEN/AFP/Getty Images)
UK

Charlie Gard’s parents were given another chance by British courts to present fresh evidence, further delaying their son from being taken off of life support.

A judge will begin seeing new evidence in Charlie Gard’s case. A lawyer for the Greater Ormand Street Hospital has dismissed claims from Charlie’s parents that there is new evidence from experts outside of Great Britain that could help save the child’s life.

A hearing today ended with the baby’s father yelling at the lawyer for the hospital and the mother crying.

The parents said they are prepared to deal with the experimental treatment’s failure, but they would like to try it before giving up on the life of their child.

Charlie’s parents want to be able to take their son from Greater Ormand Street Hospital of their own accord. Right now they can’t do that until a court agrees.

The hospital said the treatments the parents want to try are unjustified because they don’t represent a viable cure. Nucleoside therapy is not even approved by the FDA, but Charlie’s parents are seeking special approval.

Sian Harding, director of the British Heart Foundation Cardiovascular Regenerative Medicine Center at Imperial College, said to AP that the disease can often be countered preventatively, before the baby is born, but is extremely difficult afterward. “It is because there is no cure that the scientific and medical community have concentrated on preconception mitochondrial therapy, and it has been an enormous advance that this is now licensed by the government. It allows parents with these mutations to have healthy children, though sadly, cannot help babies already born,” said Harding.

The British courts are saying that the condition is irreversible, and that the longer Charlie lives the worse his condition will become. The parents said their is new evidence about the treatments they are seeking and would like to try in America.

Baby Charlie was born with a condition called mitochondrial depletion syndrome, a rare condition, and a severe form of it nonetheless. He is unable to move or breathe on his own.