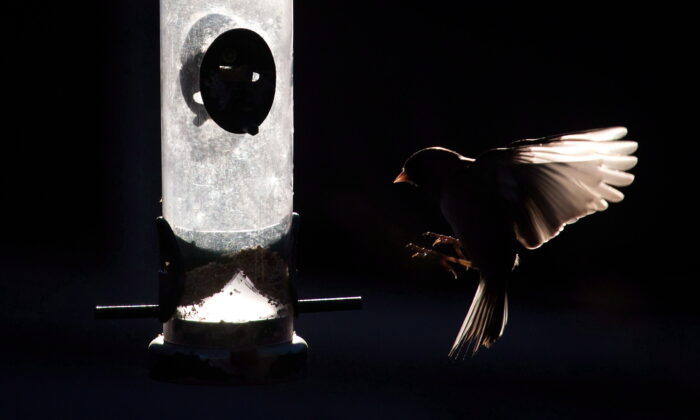 A small bird lands on a bird feeder in North Vancouver, in a file photo. (The Canadian Press/Darryl Dyck)
Canada

As two more poultry flocks in British Columbia tested positive for the H5N1 avian influenza virus on May 4, an animal welfare group is calling on the public to temporarily remove their backyard bird feeders.

The Canadian Food Inspection Agency (CFIA) said the two flocks in the cities of Kelowna and Richmond were the third and fourth confirmed flocks to have contracted the virus.

On May 5, the British Columbia Society for the Prevention of Cruelty to Animals (BCSPCA) called on the public to briefly take down their backyard bird feeders, which it says help spread the virus that is often “shed by infected birds through feces and respiratory secretions.”

“Bird feeders facilitate the spread of the disease by encouraging unnatural congregations of birds and attracting other wildlife including predators and rodents. Fallen seed is also an especially bad source of disease—when birds feed from the ground, they are also exposed to droppings that accumulate below a feeder,” the society said in a news release.

“The presence of bird feeders and baths can also increase the risk of transmitting the virus between nearby animals like backyard chickens or turkeys.”

The first confirmed H5N1 case in B.C. poultry was at a commercial producer in the Regional District of North Okanagan in mid-April. Two other poultry flocks in Kelowna and Central Kootenay were also detected to have the H5N1 virus in late April.

While the CFIA has placed the infected premises under quarantine, the agency urged owners of small or backyard flocks to remain vigilant and have appropriate preventative measures in place.

“Measures include eliminating or reducing opportunities for poultry to encounter wild birds, reducing human access to the flock, and increased cleaning, disinfection, and sanitization of all items (including clothing and footwear) when entering areas where flocks are housed,” it said.

The H5N1 strain of the avian influenza is considered highly pathogenic, causing severe illness and death in birds.

“Sick birds may appear lethargic, unusually ‘fluffed up,’ have nasal discharge, or have excessively watery eyes or swelling of the head and eyelids,” BCSPCA said.

BCSPCA said hummingbird feeders currently pose the lowest risk since they are species-specific and a limited group of birds would visit them, though it still recommends regular cleaning and changing the nectar to avoid deadly fungal outbreaks.

The society also notes that while avian influenza mostly affects avian species, it can on rare occasions cause disease in humans that have close contact with the infected birds.

The public is asked to report sightings of sick or dead wild birds to the Canadian Wildlife Health Cooperative at 1-800-567-2033.

“Please do not bring deceased birds to a wildlife rehabilitation centre or veterinary clinic as they will not be able to test for the disease,” BCSPCA said, adding that if the report is assessed to require further investigation, a biologist may retrieve the carcass for further testing.