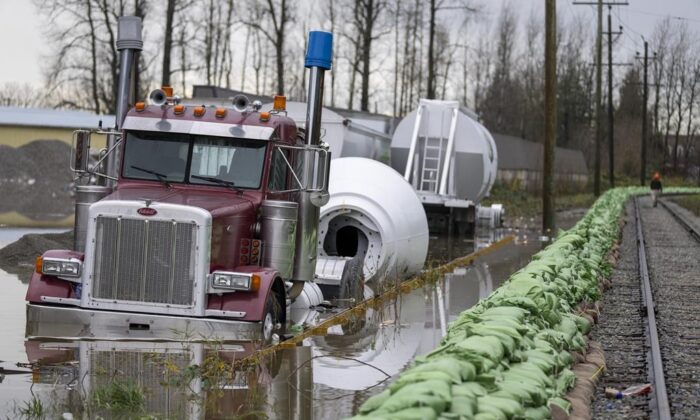 A truck gets swallowed up by rising flood waters from the United States as waters cross the border into Abbotsford, B.C., Nov. 29, 2021. (The Canadian Press/Jonathan Hayward)
Canada

VANCOUVER—British Columbia is bracing for more rain after mudslides and flooding caused devastation in parts of the province.

Environment Canada says up to 200 millimetres of rain could drench the central coast of B.C. and parts of Vancouver Island through Wednesday, possibly causing water to pool on roads and flooding in low-lying areas.

Up to 140 millimetres of rain was expected near the North Shore mountains and Squamish, prompting the agency to say motorists should avoid driving through water because even shallow, fast-moving water across a road can sweep a vehicle or a person away.

Snowmelt could add to increased runoff and flooding as milder temperatures are expected at higher altitudes.

The third so-called atmospheric river comes after Environment Canada issued a red-level alert due to heavy rainfall that was expected to intensify today and ease on Wednesday.

That’s when a cold front is expected to move across Metro Vancouver to Whistler, with a forecast calling for strong southeasterly winds with gusts up to 60 kilometres an hour accompanying the storm.