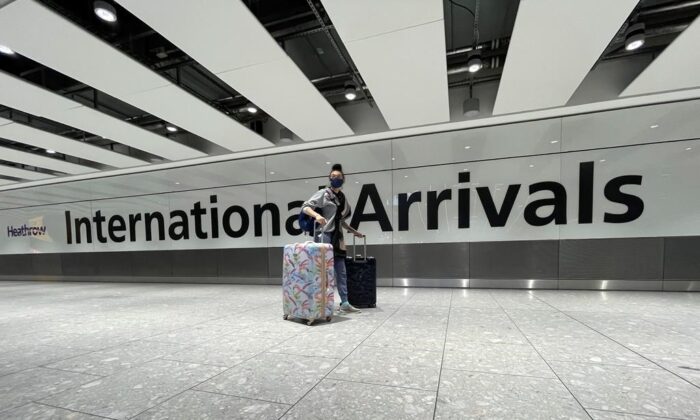 OTTAWA—Many British Canadians are frustrated after being snubbed by a new plan to ease quarantine restrictions for entry to England and Scotland.

The United Kingdom countries announced Wednesday that travellers who were fully vaccinated in the United States or Europe will not have to quarantine upon arrival as of Monday.

Shaun Campbell says he came to Canada as a student from the U.K. in February 2020 and has not been able to visit his family since—even when his uncle died after he was infected with COVID-19 last year.

He has written to government officials including the English transport secretary to express his “extreme disappointment” over the decision to exclude travellers from Canada from the new changes.

The English and Scottish governments did not provide a reason why Canada was not included in the new quarantine exceptions.

In recent weeks, Canada has reported much lower new COVID-19 case counts than the U.S., the U.K. and many European countries.

Deputy Prime Minister Chrystia Freeland says the Canadian government respects the sovereignty of the U.K. and its right to make decisions on travel restrictions.

Freeland didn’t say whether the British government has provided any explanation for why Canadian travellers were not included in the new quarantine exemptions and whether Ottawa is pursuing diplomatic efforts to change that.

Non-essential travellers from the United Kingdom are not currently permitted to enter Canada. On Sept. 7, those who are fully vaccinated will be allowed entry.

British Canadians make a large segment of the Canada’s population. In the 2016 census, 32.5 per cent of the Canadian population reported having some ancestry from the British Isles with 6.3 million people of English origin, 4.8 million of Scottish origin and 4.6 of Irish origin.