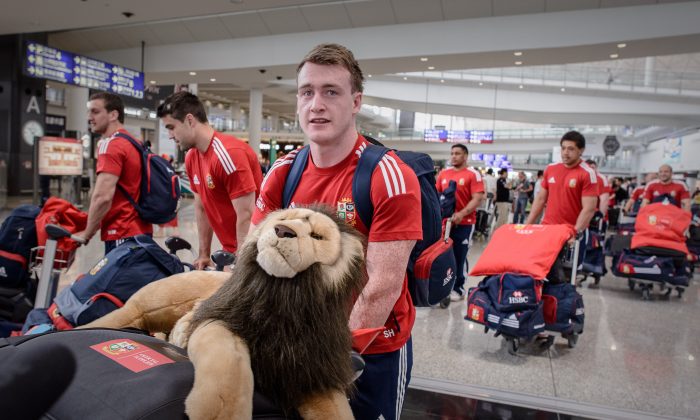 Scottish full-back Stuart Hogg carries the mascot of the British and Irish Lions as he and his team-mates arrive at Hong Kong airport on May 28, 2013. (PHILIPPE LOPEZ/AFP/Getty Images)
International

The British and Irish Lions arrived in Hong Kong two days ago for their long awaited match against the Hong Kong Barbarians at the Hong Kong Stadium on Saturday June 1. The whole rugby fraternity in Hong Kong is on tenterhooks waiting for the kick off as this is one of the biggest occasions in Hong Kong Rugby history.

Celebrating the 125th Anniversary of their first international tour to Australia and New Zealand in 1888, the Lions begin their tour with a match against the Hong Kong Barbarians, followed by a string of matches in Australia against Super 15 teams, combined county teams and a 3-match Test series against the Qantas Wallabies.

The full program includes an opening match against the Western Force at Patterson Stadium, Perth, on June 5; they then travel to Brisbane to play Queensland Reds, at Suncorp Stadium on Saturday June 8; next they head to Newcastle for a combined NSW/QLD County side on Tuesday June 11 at Hunter Stadium; then it is the NSW Waratahs at the Sydney Football Stadium on Saturday June 15; followed by a match against ACT Brumbies on Tuesday June 18 at Canberra Stadium.

The third and final Test takes place at the ANZ Stadium in Sydney on Saturday July 6.

Ulsterman Rory Best got the call-up to join his team-mate Tommy Bows the day before the Lions left for Hong Kong to replace the suspended Dylan Hartley.

For the HK Barbarians: