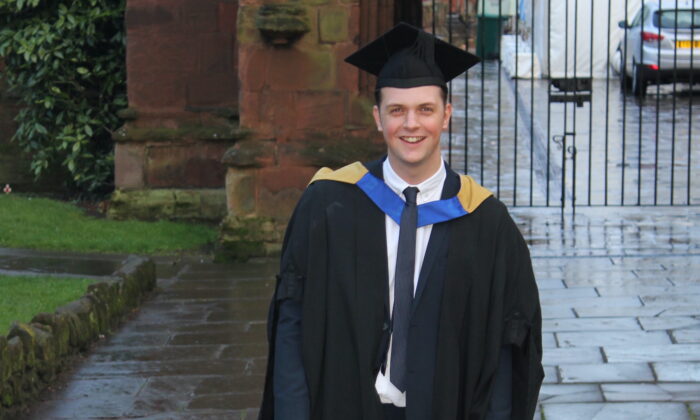 Jack Hurn, who died from complications of the AstraZeneca COVID vaccine in June 2021, in this undated handout image. (Family handout/FCB Manby Bowdler/PA)
UK

An inquest heard that a 26-year-old British man who died from complications of the AstraZeneca Covid vaccine was given out-of-date information about the risk of blood clots on the brain.

A week-long inquest into the death of Jack Hurn on May 27 recorded a narrative verdict—meaning that the coroner records only the facts without making a judgement as to who or what was to blame.

According to the coroner, Hurn was informed that the risk of blood clot complications was five times lower than the actual official guidance at the time.

Hurn died in June last year, less than two weeks after receiving the jab in the West Midlands. He became unwell eight days after the jab and died in hospital on June 11 despite emergency surgery.

At the time, official medical guidance was that patients aged under 40 should be offered an alternative to the AstraZeneca vaccine.

The guidance stated that the patient could make “an informed choice” to go ahead with the AstraZeneca shot.

However, in Hurn’s case, according to the coroner, he was wrongly informed of the risks. Instead of a one in 50,000 risk, as per the guidance at the time, he was told by his GP that the risk of blood clots was one in 250,000.

The inquest heard that after being told the vaccination hub had no stock of the Pfizer jab, he decided to go ahead with the AstraZeneca.

Area coroner for Birmingham Emma Brown said there was no doubt that Hurn had taken “on board” the statement that the risk was one in 250,000.

She noted that at the time, the Joint Committee in Vaccines and Immunisation advised that it was preferable that adults under 40 without underlying conditions be offered an alternative to the AstraZeneca—but could go ahead with the AstraZeneca if that made an “informed choice.”

“Jack was not given all of the information to make an informed choice, “she said. “In particular the risk of complications for his age group was understated.”

In a statement, Hurn’s family said: “Jack was our world. Our family will never be complete without him and we are still struggling to come to terms with his death.

“All Jack wanted to do in life was to be the model son, model brother, loyal partner, best friend to many, a good citizen, and to be the best person in whatever he did.

“This week’s inquest, although painful, has helped us to understand more about the circumstances around what happened both at the vaccine clinic and at the hospitals in Redditch and Birmingham.”

“But it is clear that there were failings, delays, and inconsistencies which meant Jack was not given the level of care we would have wanted him to receive.”

A spokesman for NHS England in the Midlands said, “A number of immediate actions were taken as a result of the incident, and we will continue to work with our partners in respect to the coroner’s findings.”