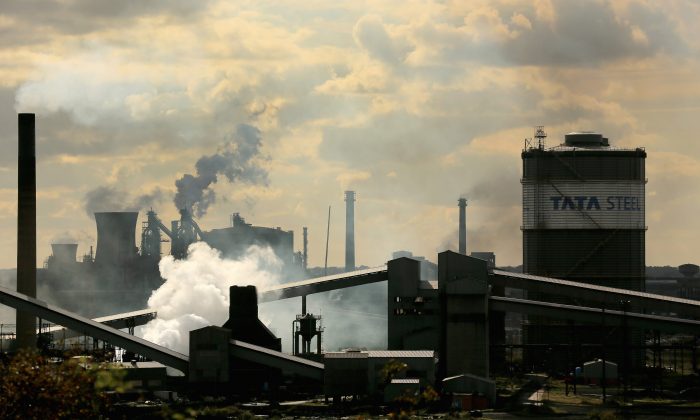 Tata Steel is planning to sell its U.K. business after the company’s board unanimously concluded that saving its plants in the country was simply not affordable. A statement released by Tata read:

While the global steel demand, especially in developed markets like Europe has remained muted following the financial crisis of 2008, trading conditions in the U.K. and Europe have rapidly deteriorated more recently, due to structural factors including global oversupply of steel, significant increase in third country exports into Europe, high manufacturing costs, continued weakness in domestic market demand in steel and a volatile currency.

These factors are likely to continue into the future and have significantly impacted the long term competitive position of the U.K. operations in spite of several initiatives undertaken by the management and the workers of the business in recent years.

It is ironic that Tata Steel has come to dominate the discussion surrounding the future of the British steel industry. In the hay days of Empire, the steel industry in Britain fought tooth and nail to stop the formation of Tata Steel in India because they feared it would damage their lucrative rail market in the country.

While across the Atlantic in the United States, Donald Trump wants to “make America great again” by bringing manufacturing jobs back from China and Mexico, Britain is willing to let market forces decide. Steel is only part of the long list of heavy manufacturing industries to move out of Britain since the 1970s to lower cost areas. Towards the end of the 1990s, the Department of Trade and Industry was arguing for Britain to focus on “knowledge-based industries” and leave heavy manufacturing to emerging economies. As a result, policies were initiated to support economic clusters that would promote industries that emphasized design, research and innovation.

But companies like Tata Steel persisted, and have continued to operate in Britain to this day, even when their plants ran at a loss: in February 2016 alone, the company’s European business reported a quarterly loss of 68 million pounds ($96 million)—more than double that of the previous three months.

A Question of Community

In the aftermath of the 1,050 job cuts announced by Tata Steel in January, the news cycle has tended to focus on how the cuts will affect the towns which have grown around and come to rely on its industry—in particular Port Talbot in South Wales where the company employs around 4,000 people.

The workers at the Port Talbot site, where 750 jobs were lost in January, have imparted several passionate pleas to their employers, in an attempt to secure their jobs. Indeed, as the board of Tata Steel gathered to make the final decision over the plant’s future in the Welsh town, a delegation from the Community trade union were joined by Aberavon MP Stephen Kinnock in Mumbai to meet with senior representatives of the company.

Multinational companies are supposed to be agile in finding opportunities to cut costs and meet customer requirements in order to survive in the global cut throat competition. The modern contract between an employer and employee does not oblige either to go beyond what is necessary—but in this case Tata have.

At every opportunity they have made clear that they are listening to their workers, reiterating—prior to Kinnock initially breaking the news—that: “If we have significant news we always seek to tell our employees first.”

In the face of cheap imports of steel from China, production in the U.K., and Europe, had become unprofitable. In this context, the invitation to the union representatives at the Tata Steel’s board for consultation might appear perplexing to many observers. But for those who know Tata, this is hardly surprising.

Tata Steel has a long history of involving workers in strategic decision-making, dating back to 1920, when it was the first company in India to introduce joint consultation with its labor. And its discussions with union leaders ahead of this most recent decision are just another example of this.

But despite their best efforts the fact remains that selling off its plants could potentially devastate the lives of 15,000 workers alone—a number which significantly rises when you consider those working in supply chains and other supporting industries.

Port Talbot represents a town whose fortunes are tied to steel manufacturing, like Redcar before it. Though no formal plan to save the steel industry has been discussed at this early stage, the government is said to be keen to find a buyer for this site in particular.

The decision to sell, and not close, the Welsh site mirrors Tata’s decision to sell its Scottish operations earlier this year: even in its final hours, Tata looked to be trying to save its loyal staff, but ultimately needed help.

The Welsh Assembly is said to be keen to stop the decimation of the steel industry in Wales, while the British government is also looking in to ways it can save Britain’s steel. Too little, too late? Perhaps, but this also raises the question of the role of government.

Do we want an interventionist government who picks winners? Maybe not, but there is a role for them to play. While the government may be able to avert the current job losses at Port Talbot by arranging a buyer, the question is will this be a viable long term option? There was similar optimism when Tata Steel acquired the plant from Corus in 2007.

What is clear is that radical new thought about manufacturing in Britain is needed. There are few multinational corporations out there that operate like Tata—and though the government may be keen to step in and save the steel industry, it is manufacturing in the U.K. as a whole that needs a complete overhaul to survive.

Swapnesh Masrani is a lecturer in international business at the University of Stirling in the U.K. This article was originally published on The Conversation.