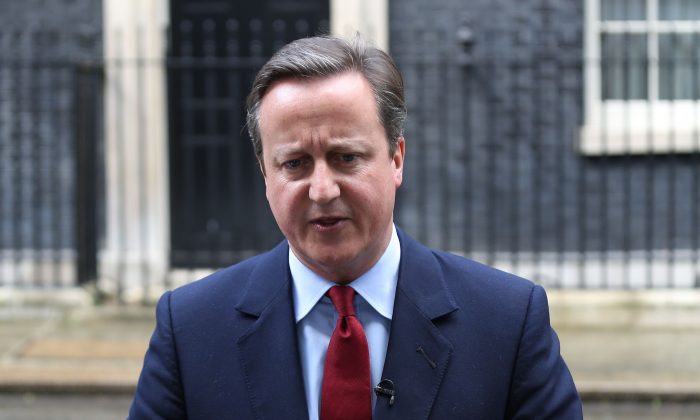 Britain's Prime Ministe, David Cameron, makes an announcement Monday July 11, 2016, outside No.10 Downing Street, London, after Theresa May secured her place as the United Kingdom's second female prime minister through the surprise withdrawal of her only rival in the battle to succeed him. (Philip Toscano/PA via AP)
International

LONDON—The brutal swiftness of British politics was on display Tuesday as moving vans pulled up to take David Cameron’s possessions away from 10 Downing Street and his successor posed for photos in front of her new home.

Cameron will step aside on Wednesday after losing the campaign to keep Britain in the European Union. The next prime minister, Theresa May, is seeking to bring calm to Britain after upheaval following the unexpected result.

Ministers—including May—gathered for Cameron’s 215th and final weekly Cabinet session Tuesday, the day after she was confirmed as the new Conservative leader and prime minister-in-waiting.

The moment was bittersweet. Culture Secretary John Whittingdale said there had been a “touch of sadness” to the meeting, which saw May and Treasury chief George Osborne lead tributes to Cameron.

Cameron’s spokeswoman, Helen Bower, said ministers banged the Cabinet table in approval and tribute at the end of the “warm and reflective” meeting.

Cameron resigned after Britons voted—against his advice—to leave the EU. May will have to deal with the political fallout and oversee the complex process of separating from the bloc.

She spent the day considering the makeup of her own Cabinet before she moves into 10 Downing Street on Wednesday. She went to Conservative head office and got down to work.

Cameron has said he will give his resignation to Queen Elizabeth II after his last appearance in Parliament as prime minister; May will then go separately to Buckingham Palace to meet with the queen and take up her new post.

British media have focused on whether Osborne will keep his job in charge of the economy, which has been rattled since the Brexit vote.

With the pound in crisis and fears over the wider economy, some argue that May could opt for continuity and keep Osborne in place, particularly as he has the confidence of many in the banks and markets.

But others say that the key position should go to someone who favored leaving the European Union. Osborne, a one-time leadership hopeful, had strongly backed the bid to stay in the 28-nation bloc.

May supported remaining in the EU, but has promised to give prominent “leave” campaigners key Cabinet roles in a bid to heal the party’s longstanding split over Europe.

Two of the leading Brexiteers, former London Mayor Boris Johnson and Justice Secretary Michael Gove, were briefly Conservative leadership contenders, and May could show magnanimity by putting them in her Cabinet.

She has also said she will appoint a “Brexit minister” to oversee negotiations with the EU.

May is already facing pressure from the 27 remaining EU countries to invoke Article 50 of the bloc’s constitution, which sets the clock ticking on two years of formal exit talks.

She is also facing calls from opposition politicians to call an early election, before the next scheduled vote in 2020.

In remarks to party workers Tuesday, she signaled strongly she would not do that, saying the party must “put this time to good use, to build the support we need to go to the country in four years’ time, and not just win, but win big.”

Even so, May might be tempted to go to the polls to confirm her own mandate, and because the main opposition Labour Party is in the midst of a leadership struggle that puts it in a weak position.

Leader Jeremy Corbyn has lost the support of most Labour members of Parliament and is facing a challenge from legislator Angela Eagle.

The party’s governing National Executive Committee is meeting Tuesday to rule on whether Corbyn should automatically be on the ballot in a leadership contest, or whether he needs to gather nominations from 51 lawmakers—something he would struggle to do.

Corbyn is likely to mount a legal challenge if the decision goes against him.

Left-winger Corbyn has a strong base of support among grassroots Labour members and some trade union leaders.

Theresa May to Become Britain’s Next Prime Minister

Len McCluskey, general-secretary of the Unite union, called Eagle’s challenge a “coup” and said it would be a “sordid little fix” to exclude Corbyn from the ballot paper.

The leadership battle has turned bitter, and risks splitting the century-old party in two. Police said Tuesday they were investigating reports that a brick had been thrown through the window of Eagle’s constituency office in northwest England.

Corbyn said the attack on Eagle’s office and abuse directed at other lawmakers was “extremely concerning.” Last month Labour legislator Jo Cox was shot and stabbed to death in her northern England constituency, the first lawmaker to be killed in a quarter of a century.

“As someone who has also received death threats this week and previously, I am calling on all Labour Party members and supporters to act with calm and treat each other with respect and dignity, even where there is disagreement,” Corbyn said.