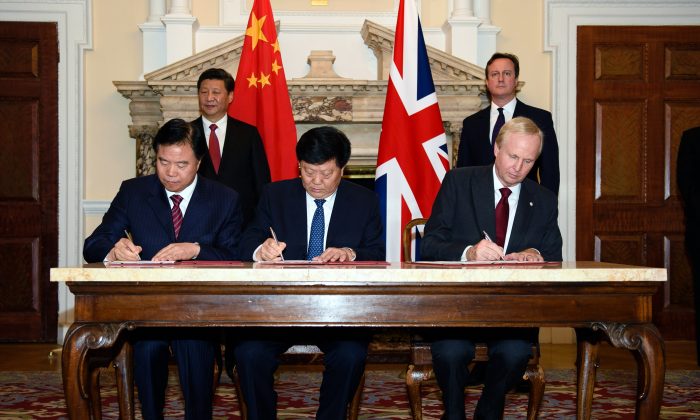 At first glance, it seems an almost inexplicable paradox. A right-wing British government has invited companies controlled by the Chinese Communist Party—and in one case, the Chinese military—into the heart of the U.K.’s strategically vital energy infrastructure. The nuclear deal between Britain and China goes against the advice of the security services, the military and the U.S. government.

So to explain this paradox, we must look carefully at another major deal in the British government’s flirtation with President Xi Jinping: the inter-penetration of the two countries’ financial services.

There would seem to be no possible connection between Chinese companies building and operating nuclear power stations in 2020s Britain and a curious political role created in 1571. But the fact that the Remembrancer, a representative of the City of London Corporation, is allowed to attend and monitor debates in the House of Commons, says much about Britain’s priorities.

When considering economic and budgetary policy, the Remembrancer is at hand to ensure that our elected representatives remember that, whatever other interests they might serve, the needs of financial services must be paramount. And the near-invisible hand of the Remembrancer seems recently to have been at work ensuring that Britain’s infrastructure is made accessible to Chinese state-owned companies.

London is at the heart of the matter. It is the focus for the country’s economic, cultural, and political power. Its primacy has been sharpened as Britain’s elites are reproduced through the same private schools and universities, and operate within the same social networks. The state has emerged with a structural propensity to privilege the interests of London elites over all others.

The problem emerged at the end of the 17th century and continued for the next 260 years via the opportunities for financial and commercial speculation enabled by what was the British Empire. Gradually, the interests of financial services came to dominate economic policy formation.

That would be problematic in any economy, but in Britain it has been doubly so because of the City’s strong preference for global speculation, or “casino capitalism.” This has come to supersede investment which supports the renewal of the productive, manufacturing basis of the economy.

Against the Common Good

Consequently, in the late 19th century, when British manufacturers were first confronted by German and U.S. competitors, they were effectively abandoned. With their obsessively short-termist orientation, banks and the stock exchanges fought shy of investing in innovation, product renewal, and advanced production processes. And no government since has intervened to reconfigure the interests of City of London institutions to match more closely our common good.

Britain Sells Out on Human Rights for Chinese Investment

Fast forward to November 2015 and we are still living with this legacy. In 2012, estimates of the wealth of Cabinet members suggested that 62 percent were very wealthy individuals whose family fortunes were largely wrapped up in financial and real estate speculation. In the current Cabinet, that is likely to be even more the case. And they belong to a Conservative Party that obtains a significant part of its funding from hedge funds and other City institutions.

Whatever one’s political persuasion, it is hard not to conclude that there are material interests in place that encourage government policy towards the expansion of opportunities for financial speculation. This is now so much the case, it seems, that it is allowed to override some of the Conservative Party’s most deeply held ideological positions.

Let’s assume that new investment in nuclear power is essential—and that’s a very big assumption indeed. The government must explain why less risky (strategically and geo-politically) alternatives to Chinese involvement, such as investment by Japanese or U.S. companies, were not seriously pursued.

Difficulties in obtaining the investment from British banks and the stock market might have had something to do with it. But ultimately the decision to involve Chinese companies—initially with EDF at Hinkley Point and then on their own at Bradwell and Sizewell—only makes sense if it is seen as part of a quid pro quo for the previously announced financial services deal.

Britain and China’s agreement to explore real-time linkages between the Shanghai and London stock exchanges offers an enticing glimpse of the future for City institutions as they hope that China’s economy will become an historically unprecedented financial services bonanza. They will get easier access to the Chinese market, while Chinese state-owned banks, such as the China Construction Bank, will join the Bank of China in being able to deal on the London stock exchange.

Should the bonanza materialize, it will offer the potential to seriously boost City profits. For the rest of the country, these deals point to a rather different future.

They put the Chinese Communist Party and military at the heart of strategic infrastructure. They interlink the British and Chinese financial systems at a time when the latter is structurally weak, poorly regulated, and struggling with corruption.

Worryingly, the Chinese financial system is also subject to very high levels of non-performing loans. With the onset of recession in the Chinese economy, that toxic debt risks becoming an ever greater problem. So, roll on the next—China-inspired and British-endorsed—economic collapse?

Most depressingly, this confirmation of the City’s gilded position provides further endorsement for speculation and detracts from pressure on the City to help tackle economic rejuvenation and wealth inequality. With this kind of support, the City can safely ignore the continued wasting of the country’s real economy, with its desperate need for investment in its productive base and regional economies.

To understand the reasons for all political-economic decisions, we have to strip away the mystery and ask: “Who wins and who loses?” With the China deal, it seems clear that whomever elses loses, the Remembrancer looks set to be the only real winner.

Jeffrey Henderson is a professor of international development at the University of Bristol, U.K. This article was previously published on TheConversation.com