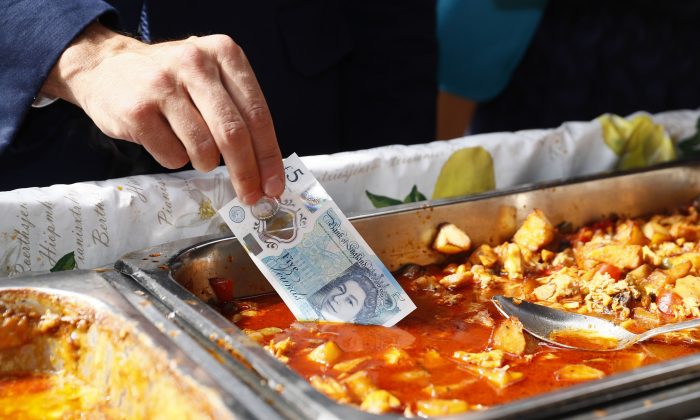 Bank of England Governor Mark Carney dips a new plastic £5 note into a tray of food as he buys lunch from a stall at Whitecross Street market in London, Tuesday, Sept. 13, 2016. The polymer fiver is said by the Bank of England to be cleaner, safer and stronger than paper notes, lasting around five years longer. (Stefan Wermuth/Pool Photo via AP)
International

Britain’s New Money Is Plastic, Easy to Launder (In Machine)

LONDON—The times they have a-changed: Britain’s new money is plastic.

The new 5-pound ($6.60) bill introduced Tuesday is strong polymer and can handle a trip through the washing machine without shredding like the paper cash it’s replacing.

It’s got the latest anti-counterfeit and security features and Bank of England officials insist it will be cleaner, safer and stronger than paper money.

But it’s not all new and modern: The portrait on the new fiver depicts wartime leader Winston Churchill, still one of Britain’s most revered statesmen.

Some 440 million of the new notes will be phased in, to be followed in the coming years by new 10-pound and 20-pound plastic bills.

Paper 5-pound bills will be usable until May 5.