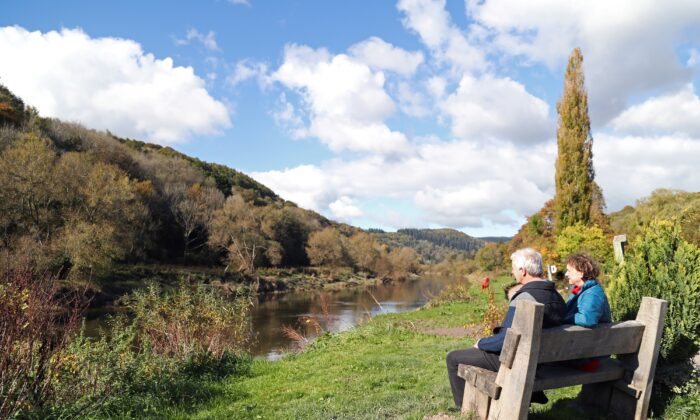 A couple sit on a bench looking out across the River Wye towards Wales, from the village of Brockweir, western England, on Oct. 15, 2020 (Geoff Caddick /AFP via Getty Images)
UK

Britains Most Iconic Waterways and Lakes are ‘Dying’ Say Campaigners

Britain’s most iconic waterways, including the jewel in the crown of its freshwater lakes, are “dying” say leading campaigners, because government agencies are failing to crack down on sewage and slurry polluters, posing a risk to health and wildlife.

Campaigners say years of swingeing cuts have fatally weakened the environment agency’s role in protecting England’s celebrated Lake Windermere in the north-west of the country, once inspiration for Romantic poet William Wordsworth of “Daffodils” fame.

Environmentalists accuse the agency of not using its enforcement powers to prevent water companies from discharging effluent from wastewater treatment works into the lake’s catchment area. The outflow from privately-owned septic tanks near the popular lake is also an issue.

The Environment Agency insists that monitoring data indicate levels of pollution in the lake are starting to drop but scientists have now ramped up their warnings saying toxic algal blooms are feeding off nutrients from the fecal matter in the water.

“Sewage is bad in terms of the different bacteria it introduces but most importantly it introduces phosphorous which acts as fertiliser for algae,” ecologist Matt Staniek told The Epoch Times.

Blue-Green Algae Can Kill a Dog

Not only do algal blooms kill off fish by starving the water of oxygen, explained Staniek, but he says he would not swim in the lake.

“Blue-green algae is actually toxic to people. It will kill a dog if it drinks water with blue-green algal bloom in it and if you were to drink it you’d most likely end up in hospital,” he emphasised.

Staniek, 26, who grew up in the area, is appealing for government intervention despite Windermere’s twin status as a world heritage site inside a national park named for the lakes.’

“It is a failing of government that water companies are still discharging sewage into our rivers,” says Staniek. “The public made it more than clear they don’t want that. They [the government] didn’t make it a legal mandate that they have to stop.”

A spokesman for the Environment Agency told The Epoch Times the issues surrounding the health of the lake were complex. “We have been pressing [water company] United Utilities to make progressive improvements to its treatment works on the lake.” The spokesman said rules and permits existed to minimise the risk of pollution from privately-owned septic tanks.

But Staniek said dippers and kingfishers had moved away north to less polluted waters, and fish numbers were being eroded. Hardly any Arctic char were left, he insisted, adding that salmon, lamprey, and freshwater eels were all in decline. He was concerned, too, for another flagship species, the otter.

“If thousands of fish are killed because of depleted oxygen in the lake then there won’t be any food for the otters to survive,” the ecologist said.

Staniek’s warnings chime with the findings of a cross-party parliamentary report published in January which found “chronic underinvestment and multiple failures in monitoring, governance and enforcement” leading to poor water quality.

No River in England Meets Standards

In its report, the parliamentary group found a “chemical cocktail” of sewage, slurry, and plastic in rivers, concluding not a single river in England met chemical environment standards while a mere 14 percent achieved ecological requirements.

In the last week alone, it was reported the 12-year-old son of one of the UK’s newest MPs, Richard Foord, had fallen sick after swimming in the River Culm close to the family home near Tiverton in Devon, south-west England.

Nor are the scatological problems confined to England’s river systems.

Some 200 miles south-west of Lake Windermere, the River Wye rises in the Welsh mountains dropping into a valley officially classed as of outstanding natural beauty. But algal blooms living off phosphates and nitrates in fecal matter are having a profound effect on the Wye, too, say environmentalists.

If it continues to deteriorate in the way it is, says wild swimmer and campaigner Angela Jones, the river could end up like an “open sewer.”

“It’s dying,” said Jones simply. “We haven’t got a year left for the Wye. Even if we stopped tomorrow it would take at least 10 years. Yet it’s the nation’s favourite river.”

Jones, who sometimes sleeps on the river bank, and whose long flowing locks have earned her the nickname of the “Wild Woman of the Wye,” has even tried swimming downriver towing a coffin to draw attention to the Wye’s plight.

She wants all rivers given the same protection as seas.

Jones insists a main factor is the run-off of slurry from what she says is a growing number of intensive poultry units producing eggs for the UK’s handful of big retailers. Jones said nearly 77 percent of eggs for one main chain, Tesco, come from the Wye catchment.

Charles Watson of River Action UK agrees. “The excrement of chickens has four times the nutrient content of that of cattle, humans, or pigs. Then go back to the collapse of environmental protection. The regulation of those industries has effectively collapsed.”

Watson is also concerned about “large quantities of the antibiotics in chicken slurry being washed into rivers.” What would that do to the reproduction of fish, he asks.

But the farmers union in Wales, NFU Cymru, disputed poultry farms were to blame for the pollution.

A spokesman told the Epoch Times that “farmers along the Wye catchment have made great strides in recent decades in reducing phosphate pollution run-off from agriculture.” The spokesman said improvements included changes to soil management, planting cover crops to stop erosion, using vegetation as a buffer to stop run-off into the water, and air scrubbers.

Watson is adamant, saying the Farming Rules for Water set up in 2018 to stop the polluting of rivers had not worked.

“By the government’s own admission there has not been a single enforcement of these rules since they were introduced,” he said.

As a solution, Watson proposes the development of a “circular economy.” It would see the chicken manure produced each year processed and transported to where it was needed, such as arable farms in the east of England, avoiding them the need to import chemical fertilisers.

Jones says she would like to “drop back into the quietness” of her life but is spurred on by her yearning to see the river flourish once more.

Staniek, mulling the future of Lake Windermere, is every bit as determined: “Why shouldn’t Windermere be the most pristine water that the country has to offer? I think people should be able to come and look into the waters and be inspired by the abundance of life,” he said.

A spokesperson for the water services regulator, Ofwat, told The Epoch Times: “We share the concerns of the public on sewage pollution—the current situation cannot continue.” They said the regulator was conducting a live investigation into potential non-compliance in all wastewater companies.

The Epoch Times approached United Utilities for a comment. A spokesperson said the factors affecting Windermere were “varied and complex.” The spokesperson said significant investment had been made to improve the sewage system in recent years so there were fewer storm overflow spills. They also said the lake’s four designated bathing waters were rated “excellent.”

The Epoch Times also contacted Tesco for comment. Tesco did not respond directly but provided background information on its engagement with suppliers, saying it had signed a commitment looking at reducing water pollution in the Wye and encouraged all its suppliers to do the same.

Tesco said it had directly funded the work of the Wye and Usk Foundation, a charity, which works with suppliers to implement nature-based solutions such as the creation of wetlands to reduce river pollution.

The Epoch Times approached the Wye and Usk Foundation for comment.