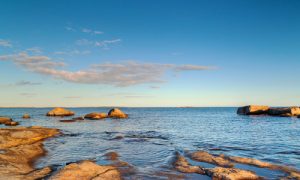 Off the coast of Cornwall, at the southern tip of the UK, on a clear day, the Isles of Scilly can be seen at some distance. Those islands, some say, are the peaks of a sunken land that was a prosperous kingdom in the days of yore.

Others say this legendary kingdom, known as Lyonnesse, was not in the location of the Scilly Islands, but rather between those islands and the mainland—a bridge of land connecting the two. Still others say Lyonnesse was actually a place in France, directly across the English Channel from Cornwall, known as Saint-Pol-de-Léon in Brittany.

Lyonnesse was first mentioned in Sir Thomas Mallory’s 15th century work, “Le Morte d’Arthur.” In this famed and influential rendition of the Arthurian legends, Mallory named Lyonnesse as the homeland of Tristan. Embroiled in a tragic love affair with Iseult, the wife of his kin and king, Mark, Tristan never had a chance to live out his days in Lyonnesse even if it didn’t sink. King Mark killed him, according to Mallory’s version of the tale.

In the 19th century, Alfred, Lord Tennyson, in his narrative poem collection, “Idylls of the King,” named Lyonnesse as the site of King Arthur’s demise. Tennyson wrote of Arthur’s combat with Sir Mordred:

The Case for Lyonnesse Being Off the Coast of Cornwall

William Camden, in his 1586 work, “Britannia,” referred to Lyonnesse as the submerged land extending from St. Michael’s Mount (on the mainland of Cornwall) out to the Scilly Isles. According to Encyclopedia Britannica, Camden took the name of Lyonnesse from a manuscript by the Cornish antiquary Richard Carew.

Carew may have conflated multiple stories, according to Adrian David Hugh Bivar of the University of London. Bivar wrote in a paper titled “Lyonnesse: The Evolution of a Fable”: “Quite insignificant Cornish beliefs in minor losses of land were expanded and exaggerated by ‘learned’ additions from similar stories independently current in Normandy and Brittany, and how to the product the name of ‘Lyonnesse’ was attached, probably by the Cornish antiquary, Richard Carew, in the reign of Queen Elizabeth.”

Atlantis May Have Been in Bolivia?
Wizards: Did They Exist?

A 15th century account of a journey made by William of Worcester also refers to a submerged land extending to the Scilly Isles. This land of Lyonnesse was said to boast 140 church towers, fertile cultivated land, and a well-to-do populace.

“The Penny Cyclopaedia of the Society for the Diffusion of Useful Knowledge,” published in 1841 by Charles Knight states that, should a settlement have existed on a now-sunken land between Cornwall and the Scilly Isles, it must have submerged before Christianity and churches reached this area.

The book states that Strabo, a 1st century Greek geographer and history, wrote about the Scilly Islands and his description does not mention such a land. This suggests Lyonnesse may already have submerged if it existed and the reports of Lyonnesse’s churches would be erroneous.

Ancient Romans inhabited the Scilly Isles and spoke of it as a singular land mass rather than multiple islands, supporting the idea that the land was later submerged. In Dorothy Dudley’s, “Excavations on Nor’nour in the Isles of Scilly, 1962–6,” published in the Journal of Archaeology in 1967, she wrote that there is evidence for the early and gradual submergence of the archipelago. Roman coins dating up to the 4th century A.D. were found on the isles during these excavations in the ’60s. It is also clear that the isles were inhabited as far back as 1200 B.C. by various settlers including some migrating from Brittany, northern France.

The Case for Lyonnesse Being Off the Coast of France

Lyonnesse may have referred to the region around Saint-Pol-de-Léon in Brittany, France, according to the Encyclopedia Britannica.

Interestingly, Epoch Times learned of a similar tale of a sunken land in Brittany. The city is known as Ys or Ker Ys. The story varies slightly, as such stories do, from version to version, but essentially it tells of King Gradlon of Brittany who built a splendid city by the sea for his daughter, Dahut.

Dahut’s moral degeneracy, however, was the downfall of the city. It is a tale like that of Sodom and Gomorrah in the Bible and like many other tales of sunken or devastated lands in history wiped out by divine forces for their decadence and degeneration.

Dahut would take a new lover to bed every night and have each one murdered the next morning, the bodies of these men thrown into the sea. A man dressed in red appeared in the city to woo her, and she fell in love. She was convinced by him to hand over the keys to the bronze floodgates that held the sea at bay, protecting the city. This man of mystery then opened the gates and the ocean rushed in, destroying the city and submerging it forever.

The king, a good man, was the only one to escape, aided by a saint and a magical horse.

Another legend related to Lyonnesse tells of Trevilian (or Trevelyan), the sole survivor of a dramatic deluge, whose white horse carried him to safety. The National Coastwatch Institution (NCI), a volunteer organization that watches the UK shores, wrote on its website: “The interesting link with reality is that the Vyvyans, one of the most famous Cornish families and landowners in Penwith for centuries, still have as their family crest a white horse saddled … an artistic reminder of that famous white horse from Lyonnesse. It’s also said the Vyvyans keep a white horse in their stables at Trelowarren, on the mainland saddled and waiting for any such crisis.”

Although the NCI reports that in the late 1900s people said they caught glimpses of city remnants below the water, and some have said pieces of buildings have been hauled up by fishermen, it seems no concrete evidence of the lost land have been obtained and studied.

Unfortunately, much of what we can piece together about the submergence of the Scilly Isles or any other land in this region depends on alternately conflicting and overlapping legends. The truth on which the Arthurian legends may have been based is a wider debate. It seems that various authors told the story of King Arthur (and his associates, such as Tristan and Lancelot) from varying perspectives throughout history, perhaps resurfacing actual events from the past but recasting them in a setting and manner relevant to the authors’ contemporaries.