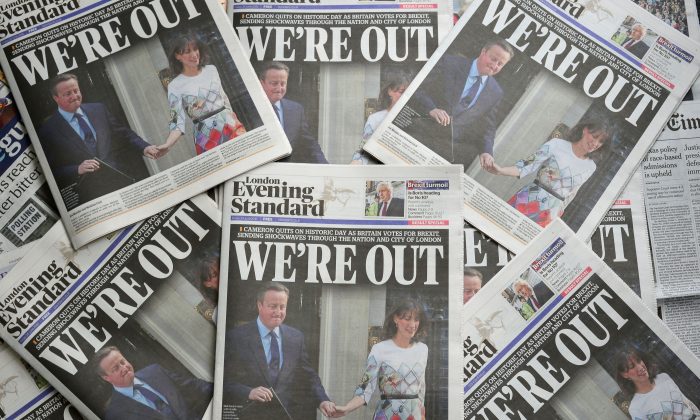 An arrangement of newspapers pictured in London on June 24, 2016, after the result of the U.K.'s vote to leave the EU in the June 23 referendum. (Daniel Sorabji/AFP/Getty Images)
Special

Britain has voted to leave the European Union. This is having an immediate effect on markets. It is also having immediate political ramifications. David Cameron has announced he will not continue in his role as British prime minister.

Legally speaking, though, the process of actually leaving will take some time. Britain will now enter a kind of phony Brexit period. It is still a member of the EU. The referendum vote is not as such legally binding. It is advisory only—but if it is out it creates a political imperative for the U.K. government to arrange its exit of the EU.

The law governing Brexit is found in Article 50 of the EU Treaty. This is a provision adopted by EU member states in 2009 to govern Brexit-like scenarios. It puts a two-year time limit on withdrawal negotiations. When the two years is up (or on the date any agreement reached before this enters into force) the U.K. is officially out of the EU.

Article 50 requires the U.K. to trigger the exit process by notifying its intention to withdraw. Not one, but rather a cascade of agreements, will follow this Brexit notification:

The initial main focus, however, will clearly be the Article 50 Brexit agreement.

How Will It Work?

The U.K. would be the first state to leave the EU but it is most likely that the European Commission, the executive arm of the EU, will do the negotiating on behalf of the remaining 27 member states. They will no doubt cast a watchful eye on proceedings, before voting on the deal.

That vote will be by a weighted majority, with bigger states like Germany, France, and Italy having a more powerful voice than smaller members (although in practice, strong efforts are made to ensure every member state can live with a deal before a matter is approved). Above and beyond this, should the Article 50 Brexit agreement venture beyond trade matters, it will then need to be ratified by every EU member state.

The European Parliament has a veto option, making it an important player too. Article 50 negotiations will thus have a lot of players with powerful voices—and many not necessarily be inclined to give the U.K. a very favorable deal lest “exiters” in their own countries get any ideas.

Legally, yes, the U.K. could delay giving Article 50 notification or avoid it altogether. But other EU states will probably refuse to negotiate until they get the notification.

Brexit campaigners have suggested adopting a swath of domestic laws so that the U.K. can short-circuit Article 50. But such measures would violate EU law and probably won’t see the light of day. Enacting them would pointlessly violate EU and international law, alienate the U.K.’s future negotiating partners and jeopardize the U.K.’s future relationship with the EU.

Can the U.K. Withdraw Notification?

This might be attempted if, for instance, the U.K. doesn’t like the way negotiations are going. It is unclear if it is legally permissible. The EU Treaty certainly doesn’t prohibit it in so many words. Political misgivings would abound—but might possibly be met by having a second referendum to reject any Article 50 deal ultimately reached.

Ireland, after all, had referendum second thoughts on the Lisbon and Nice Treaties, Denmark had them on the Maastricht Treaty and France and Holland agreed to a Lisbon Treaty deal very similar to the 1994 Constitutional Treaty earlier rejected by both states in referendum.

What Will the U.K. Get From Negotiations?

That depends on how (and who) conducts the negotiations for the U.K., and what the other states are prepared to offer it. Even assuming they prove pleasantly amenable, the U.K. will be left with awkward choices.

Does it want continued access to the single market with its 500 million consumers? If so, it may have to make Norway-like concessions—including continued EU migration and cash payments for the privilege. Does it want to block out EU migrants? Then it may well have to say goodbye to single European market access.

No matter what the U.K. chooses, it will unavoidably find itself outside the corridors of power in the EU for the first time in over forty years.

Is There Any Way Back In?

Article 50 does envisage the possibility of U.K. re-entry to the EU one day—but subject to a unanimous vote of member states. This pretty much guarantees it will only ever happen by the U.K. accepting the euro currency, participation in the Schengen area of free movement, and no rebate.

Welcome to the brave new world of Brexitland.

Gavin Barrett is an associate professor and Jean Monnet professor of European constitutional and economic law at the University College Dublin in the U.K. This article was originally published on The Conversation.