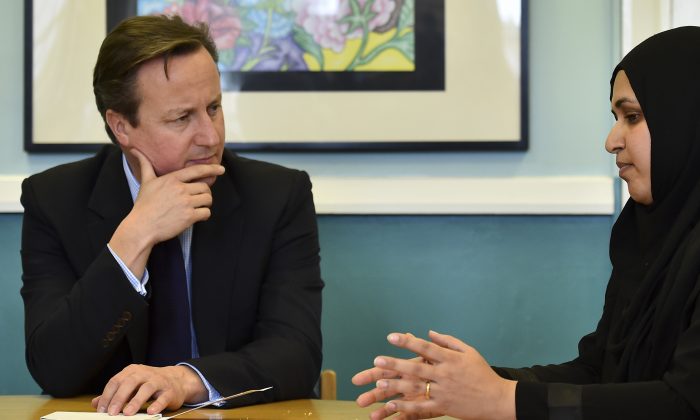 Britain to Seize Passports of Teens at Risk of Extremism

Cameron challenged Muslim communities to “own” the problem, arguing that those who reject extremism were the key to driving out radicals in schools, universities, local councils, charities, and prisons. He defined the fight against Islamist extremism as one of the great struggles of the era.

“In responding to this poisonous ideology, we face a choice. Do we close our eyes, put our kid gloves on, and just hope that our values will somehow endure in the end?” he wrote in the strategy document. “Or do we get out there and make the case for those values, defend them with all that we’ve got, and resolve to win the battle of ideas all over again?”

The measures also include barring people convicted of extremist offenses from working with children.

While Cameron didn’t define what he considers extremist views, he highlighted the hundreds of young people who have left home to fight in Syria, and the recent case of a 15-year-old convicted of inciting terrorism abroad. The government has already been able to seize the passports of those under 16 at their parents’ request, and that will now apply to 16- and 17-year-olds as well.

The measures also include barring people convicted of extremist offenses from working with children.

Muslim organizations rejected Cameron’s “One Nation” strategy, warning that it risked alienating Muslims and could be counterproductive.

The Muslim Council of Britain’s secretary general, Shuja Shafi, said the strategy was based on a “fuzzy” conception of British values. While the council supports efforts to fight terrorism, the government must not suppress freedom of thought or expression, Shafi said in a statement.

He said he saw “McCarthyist undertones” in the proposal for blacklists against people deemed to be extremist.

Human rights advocates expressed concern about the lack of detail in the proposals, particularly in regard to the definition of extremism.

“The government has created an impossible bind for itself: In the name of protecting our values, it’s now seeking to undermine the most fundamental value of all for democracy—freedom of expression,” said Jo Glanville, director of free-speech group English PEN.

“This is a deeply misguided policy that will not only stigmatize minorities, it will criminalize political speech across society and introduce a culture of caution.”