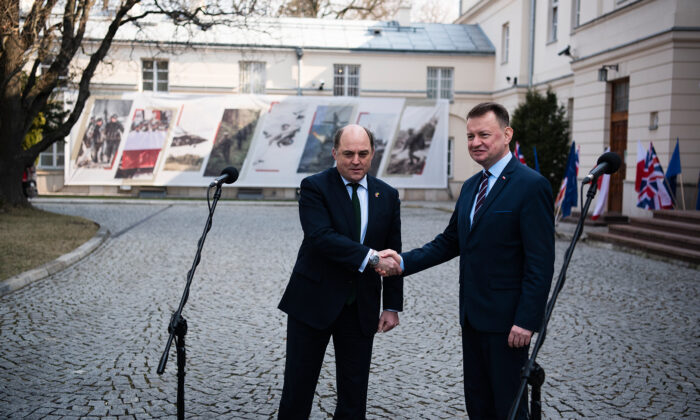 British defence minister Ben Wallace said the UK will deploy its Sky Sabre missile defence system in Poland as NATO moves to bolster its eastern flank in light of the Russia–Ukraine war.

“We are going to deploy the Sky Sabre medium-range, anti-air missile system to Poland with about 100 personnel to make sure that we stand alongside Poland, protecting her airspace from any further aggression by Russia,” Wallace said at a March 17 press conference in Warsaw.

The Sky Sabre “detect and destroy” system can intercept an object the size of a tennis ball traveling at the speed of sound, according to the UK Ministry of Defence.

It has a radar that can scan out to 75 miles for threats and a launcher with eight missiles that can reach speeds of 2,300 mph to hit fighter aircraft, drones, and even laser-guided smart bombs.

The British Ministry of Defence said the system was being deployed after a request from the Polish government and will provide a significant boost to the country’s air defences.

The move comes as Russia’s invasion of Ukraine entered its 22nd day, while British intelligence said setbacks to the offensive were leading Russian forces to resort to the use of less precise weapons that are more likely to result in civilian casualties.

“When all signs pointed to a Russian attack on Ukraine, British forces stationed in Poland were bolstered by additional troop deployments in southeastern Poland. This was the right response, which strengthened our defences against what’s now taking place across our eastern border,” he said at the press conference in Warsaw.

British troops are stationed in Poland as part of a NATO multinational battlegroup within the alliance’s so-called Enhanced Forward Presence initiative.

It comes amid a broader surge of military assets to beef up NATO’s eastern flank, with Germany announcing it was moving some of its Patriot missile defence systems to Slovakia.

Slovakia said Thursday it would be willing to part with its S-300 system, which Ukraine wants to fend off Russia, provided that Slovakia can replace it with other defensive assets.

“On land, our new posture should include substantially more forces in the eastern part of the alliance, at higher readiness, with more pre-positioned equipment and supplies,” Stoltenberg told reporters at the end of an emergency meeting of the alliance’s defense ministers.

Stoltenberg also said NATO would continue to support Ukraine with weapons shipments but made clear that no allied forces would be deployed there.

“We support peace efforts, we call on Russia, on President Putin to withdraw its forces, but we have no plans of deploying NATO troops on the ground in Ukraine,” Stoltenberg said.