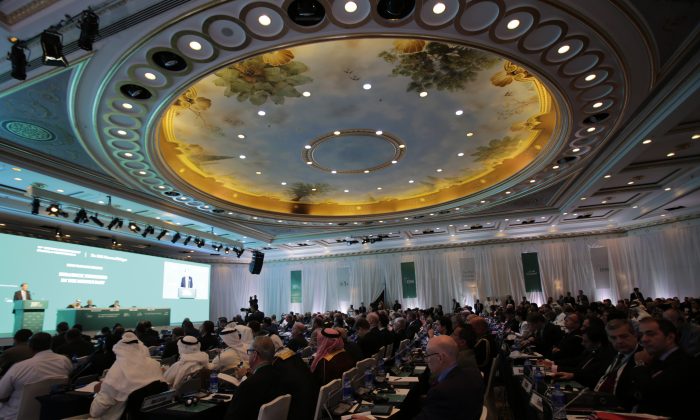 Delegates listen to United Kingdom's Foreign Secretary Philip Hammond, left on the podium, as he speaks during the 10th International Institute for the Strategic Studies in Manama, Bahrain, Saturday, Dec. 6, 2014. Britain's top diplomat says his nation has signed a deal with the Gulf Arab nation of Bahrain to bolster the United Kingdom's military presence in the region. Foreign Secretary Philip Hammond announced the deal Saturday at a security conference in the Bahraini capital, Manama, where he assured Gulf allies that "your security concerns are our security concerns." (AP Photo/Hasan Jamali)
Middle East

MANAMA, Bahrain—Britain has signed a deal with Bahrain that will bolster the United Kingdom’s military presence in the island nation and give it permanent naval base in the oil-rich Persian Gulf region, officials announced Saturday.

The agreement marks a strategic shift for Britain, which formally withdrew from its majorGulf military bases in 1971. It comes as the U.K., the United States and their allies seek to push back Islamic State group militants that have taken over large parts of Iraq and Syria and as world powers work to forge a lasting nuclear deal with Iran, which sits just across the Gulf from Bahrain.

British Foreign Secretary Philip Hammond emphasized his country’s historic links to the Gulf in announcing the plans at a security conference in the Bahraini capital, Manama.

Tiny Bahrain already hosts the U.S. Navy’s 5th Fleet, which is responsible for operations around the Arabian Peninsula as well as parts of the Indian Ocean.

The deal ensures a permanent footing for the Royal Navy in the oil-rich Gulf, Hammond said. The Strait of Hormuz, which is the Gulf’s only exit and is bounded by Iran and Oman, is the route for 30 percent of world oil supplies carried by tanker ships.

The agreement will create Britain’s first fixed Gulf base since it pulled out of former imperial outposts commonly referred to as being “east of Suez” over four decades ago.

It calls for improved onshore facilities at Bahrain’s Mina Salman port that officials say will give the Royal Navy a base to plan, store equipment and house military personnel.

Defense Secretary Michael Fallon described the 15 million pound ($23 million) facility as “a permanent expansion of the Royal Navy’s footprint” that will ensure Britain can send more ships and bigger vessels into the Gulf.

“This is a permanent naval presence that will benefit both sides to the agreement. It will give Bahrain the extra security of knowing that Britain is here now, is back for the long term, is back east of Suez for the first time in over 40 years,” Fallon told The Associated Press in an interview in Manama.

Four British mine-hunter warships are already based in Bahrain, and other British ships rely on facilities in the kingdom. Those operations were carried out on an ad hoc basis, and left personnel relying on “frankly very poor temporary accommodation,” Hammond said.