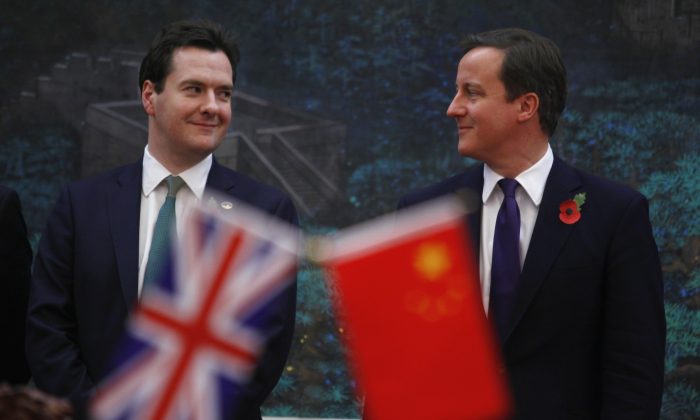 U.K. Prime Minister David Cameron (R) and Chancellor George Osborne at a signing ceremony at the Great Hall of the People in Beijing, China, on Nov. 9, 2010. (Petar Kujundzic/AFP/Getty Images)
Opinion

Britain Sells Out on Human Rights for Chinese Investment

China’s leader Xi Jinping has arrived in the U.K. on an official state visit and it seems that he will largely be welcomed in most quarters. Indeed, the British Conservative government’s approach to China seems to reflect its lack of concern for human rights both at home and abroad.

Xi is coming partly to discuss economic investment in the U.K., following Chancellor George Osborne’s visit to his shores. The strengthening of the relationship cannot be separated from the government’s desire to bring Chinese money onto U.K. shores and into U.K. businesses.

Make no mistake about it: That money is no less blood money than Congo’s diamonds are blood diamonds. China’s economic might is created by one of the most brutal regimes in the world.

Make no mistake about it: China’s money is no less blood money than Congo’s diamonds are blood diamonds.

The PRC’s ambassador to the U.K. insists that his president does not fail to engage on human rights issues, but then warns the U.K. not to “interfere” in what he opaquely calls China’s “internal affairs.”

China has always claimed that while it does not afford much weight to civil and political rights, it supposedly advocates economic, social, and cultural rights. And while those artificial distinctions between types of rights have long been revealed as nonsense, it is important to point to China’s arguments because even those claims are false.

Yes, China is party to the International Convention on Economic, Social, and Cultural Rights (while refusing to ratify the sister Covenant on Civil and Political Rights), but its participation is borderline farcical. For all its grandiose talk of ideology and culture, China systematically violates all types of rights and denies very many of its citizens their fundamental freedoms that fall under both of those core international human rights treaties.

Xi rules over a country with one of the poorest domestic human rights records in the world. Political dissent is not tolerated, with government opponents and civil society members routinely involuntarily disappeared, tortured, and executed. Lawyers and activists in particular are targeted, as shown by a recent spate of arrests and detentions.

Rights abuses are not limited to vocal opponents of the regime. Occupation and confiscation of land continues with impunity, and ethnic and religious minorities are systematically subjugated and treated as second-class citizens. There is no freedom of the press, but instead widespread censorship and restrictions on Internet access.

Crucially for Xi’s business-focused visit, China’s financial clout is inseparable from its violations of international labor standards and the denial of individuals’ rights to property, to security, and to welfare. Workers’ rights essentially do not exist, with almost no laws governing wages, working hours, or conditions. Extreme poverty is widespread. Property, particularly of the poorest and the peasants, is expropriated without compensation, and forced displacements are common.

None of that seems to matter to the British government.

Instead, the U.K.’s eyes are firmly on the financial benefits of a closer relationship with this repressive regime. And that pernicious calculus seems to be seeping out of the halls of power and into the public sphere, with British civil society organizations warned to consider the scale and type of protests they’re planning.

Of course, past Conservative governments provide ample precedent for engaging with grave human rights abusers. Margaret Thatcher enjoyed an all-too-cozy relationship with General Pinochet, a brutal dictator who tortured and slaughtered his own citizens. While her personal attitude to apartheid South Africa is still a matter of some debate, plenty of others in her government and the wider party stridently supported the country’s white supremacist government well after it was ostracized by most of the world.

And even leaving China aside, the current government has pinned its colors to the mast where it comes to human rights by threatening to repeal the Human Rights Act, a move that would radically scale back and modify the U.K.’s legal commitment to European and international human rights norms.

As was made clear by a former Labor minister on BBC Radio 4’s “Today” program as the visit began, national interests of infrastructure and business are trumping any moral imperative to call out a grotesque human rights violator. Britons may be rightly disgusted at this spectacle—but we might also ask ourselves why we didn’t see it coming.

Rosa Freedman is a senior lecturer of law at the University of Birmingham in the U.K. This article was previously published on TheConversation.com