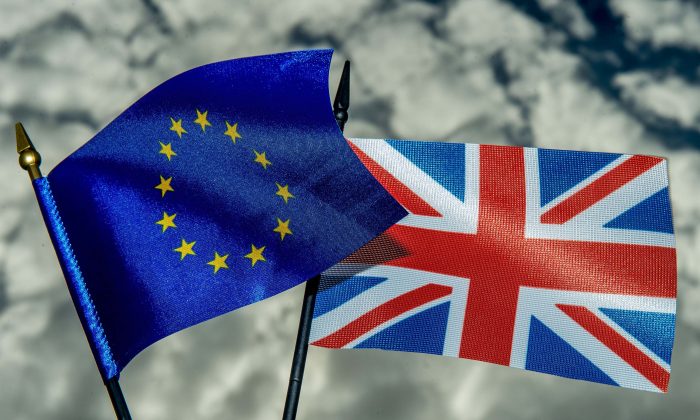 How easy will it be for the UK to exit the EU, will they remain or rejoin? (Philippe Huguen/AFP/Getty Images)
Europe

Britain Opens EU Trade Talks With a Threat to Walk Away

LONDON—Britain laid out its opening demands for upcoming trade talks with the European Union on Feb. 27, including a blunt threat to walk away from the negotiating table if there’s no progress within four months.

The two sides appear headed for a rocky first round of negotiations as they try to forge a new relationship following the UK’s departure from the now 27-nation bloc.

Britain and the EU both say they want to reach a free trade agreement, but have starkly divergent views on how it should be overseen and what constitutes fair competition between the two economies.

The EU says Britain must agree to follow the bloc’s rules in areas ranging from state aid to environmental protections, and give European boats access to UK fishing waters if the two sides are to strike a good deal.

But the UK is demanding the right to diverge from the bloc’s rules in order to strike new trade agreements around the world and to give the British government a freer hand to intervene in the UK economy.

“In pursuit of a deal we will not trade away our sovereignty,” Michael Gove, the minister in charge of Brexit preparations, told lawmakers in the House of Commons.

“We will not be seeking to dynamically align with EU rules on EU terms, governed by EU laws and EU institutions.”

That conflict will be one of the big hurdles in talks, which are due to begin on March 2 in Brussels. Fishing is likely to be another flashpoint. EU nations—especially France—want Britain to grant European boats long-term access to UK waters. Britain wants to negotiate fishing quotas annually.

Britain left the EU on Jan. 31 but remains bound by the bloc’s rules until a post-Brexit transition period ends on Dec. 31. A divorce agreement between the two sides allows for the transition to be extended for two more years, but British Prime Minister Boris Johnson insists he will not agree to that.

That leaves the two sides just months to seal a wide-ranging deal.

Britain’s negotiating guidelines insist that there is “limited, but sufficient time” to get an agreement. The document says a “broad outline” of an agreement should be done by June. It warns that if there is not sufficient progress by then, the UK could walk away and focus on “domestic preparations to exit the transition period in an orderly fashion.”

Johnson’s conservative government says that with or without a trade deal, the UK will be leaving the bloc’s structures—including its single market for trade in goods and services—as of Jan. 1, 2021.

Britain hopes by then to have a trade agreement with the bloc similar to the one struck between the EU and Canada. Such a deal would eliminate tariffs and quotas on trade in goods, but it’s less clear what it would mean for the services sector, which makes up 80 percent of Britain’s economy.

The UK also aspires to strike side agreements in areas including fisheries, law enforcement, and judicial cooperation. It confirmed, however, that Britain will withdraw from the European Arrest Warrant system, which allows for speedy extradition of criminal suspects. Senior UK police officers have warned that this will make their job harder.

The British government is warning businesses that no matter what happens, there will be new barriers between Britain and the EU, which currently accounts for almost half of UK trade. Even with a free trade deal, there will be new border checks and customs forms to fill out.

Allie Renison, head of Europe and Trade Policy at the Institute of Directors business group, expressed disappointment that “securing market access continuity seems to be less than a fundamental priority.”

She said that for most of the group’s members, “maintaining ease of trade with the single market is more important than being able to diverge from EU regulations.”

Britain’s tough talk is unlikely to impress EU negotiators, who already accuse Johnson of trying to water down commitments Britain made in the divorce deal that paved the way for the country’s seamless departure on Jan. 31. That withdrawal agreement dealt with three broad issues—citizens’ rights after Brexit, Britain’s liabilities after 47 years of membership, and the need to keep people and goods flowing freely across the border between EU member Ireland and Northern Ireland, which is part of the UK.

The two sides have agreed to maintain an open border by keeping Northern Ireland aligned to EU rules even if the rest of the UK diverges. But recent comments by Johnson’s government seeming to downplay the significance of that agreement have set off alarm bells among EU leaders.

Behind the hard rhetoric, the two sides do have room for agreement. Britain has promised it won’t undercut the EU by lowering standards on environmental protection, food hygiene, or workers’ rights.

“We’re not going to engage in some race to the bottom,” Johnson said.

But Britain won’t agree to let the EU be the judge of whether it is living up to those commitments. The challenge for negotiators will be to find a way to make that commitment binding that both sides can agree on.

Former British trade negotiator David Henig said both Britain and the EU appeared “too optimistic” in their conflicting opening gambits.

“Which is fine at this stage. As long as we’re aware we won’t, in fact, get all we want. As the EU won’t,” he wrote in the Daily Telegraph.

In Brussels, EU spokeswoman Dana Spinant said she “wouldn’t want to jump to conclusions about the outcome” of talks.

“However, the commission maintains its capacity to prepare for a no-deal [UK exit]” even as it prepares for “a positive result of those negotiations,” she said.