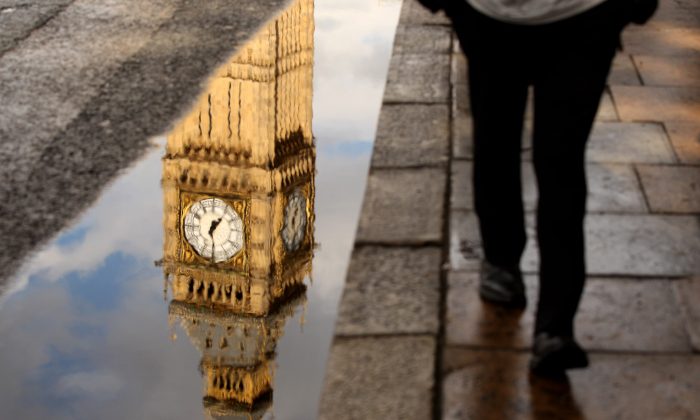 A man walks past a puddle with the reflection of Big Ben's Clock Tower in London, England, on July 14, 2010. (Oli Scarff/Getty Images)
Opinion

As a visitor last week to the European Parliament in turmoil following the United Kingdom referendum, I found it difficult to find anyone who does not hope the British will overturn the “Brexit” outcome of June 23 with a new referendum to be held as quickly as possible.

Jean Monnet’s dream of European unity is currently seen as facing its most dangerous existential threat ever. The U.K.’s leaving could well result in the beginning of the end for the EU, with many Brexiters, including Marine Le Pen of France’s far right National Front, Donald Trump, and Vladimir Putin, actively seeking such an outcome.

A more responsible prime minister than David Cameron, who spent half a decade attacking much about the EU before calling a referendum without vote threshold conditions, taking over in the fall—most probably the pro-EU Home Secretary Theresa May—could readily provide a democratically legitimate way to overturn what was clearly an advisory rather than a binding referendum.

A number of EU precedents are available for holding second votes. In a 1992 referendum, Danes rejected joining one of the treaties that led to the formation of the EU, but in a second consultation almost a year later and after second thoughts voted to join. Irish voters in mid-2008 turned down the Treaty of Lisbon of the EU, but approved it in a second referendum in late 2009.

A recent U.K. House of Lords report stressed that the assemblies of Scotland, Northern Ireland, and Wales must each approve any departure of Britain from the EU. Scots voted emphatically to remain in the EU by 62 percent to 38 percent. Nicola Sturgeon and her governing Scottish National Party in Edinburgh have committed to use any measure to remain, including calling a second referendum after the one two years ago on whether Scots still wish to remain part of Britain. One post-June 23 opinion survey indicated that 59 percent of Scots would opt for independence if such a vote were held now.

A new prime minister could simply declare that the U.K. will not risk national dissolution by honoring the Brexit victory. Cameron should have indicated before the voting that on an issue of such constitutional importance two-thirds majorities would be required in all four constituent parts of the country.

The most cynical Brexit campaigners, Conservatives Boris Johnson and Michael Gove, seem to have overlooked that Germany, which has the strongest European economy by far, both encourages immigration and continues to stress export manufacturing. For decades, Britain’s economic policies have encouraged deindustrialization and international banking—a sector now in serious jeopardy if the U.K. discards its platform for access to the EU.

In the current Alice-in-Wonderland circumstances, including the approximately 450 of 650 Westminster MPs who oppose leaving the EU, the best short-term course is for Cameron’s successor as prime minister not to trigger the departure process of article 50 of the EU governing treaty. Other EU leaders might assist by indicating that any U.K. departure would face severe conditions, in part to serve as a deterrent to anyone else considering leaving.

Friends of the EU and U.K. everywhere, including the United States and Canada, should begin stressing whenever possible that despite serious economic problems most residents of 28 independent EU countries enjoy a better quality of life, including peace, than at virtually any time in their respective histories. The EU must certainly be reformed significantly in some of its governance practices, but overall it represents some of the better features of the human condition today.

The last thing Britain and the world need is a Europe dissolving into competing nationalisms.

No member state has ever applied to leave. There are always nations seeking to join, but membership requires democracy, the rule of law, a market economy, and guarantees for the protection of minorities and human rights. The last thing Britain and the world need is a Europe dissolving into competing nationalisms. Field Marshall Bramall, the U.K.’s most senior soldier, notes correctly that it could be catastrophic for Britain to be faced with “a broken and demoralized Europe just across the Channel.”

In short, Britain should exit its Brexit as quickly as possible.