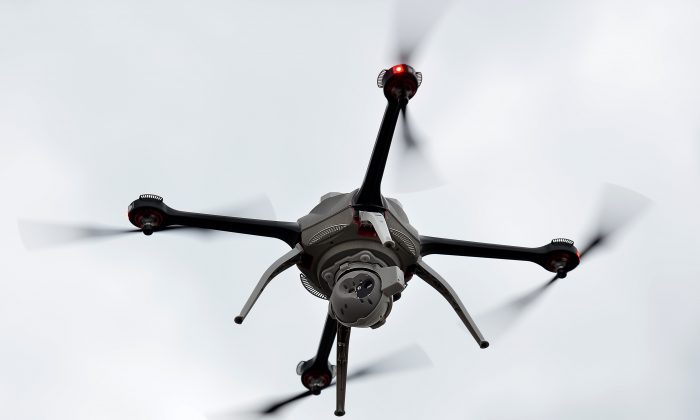 The scarcity and novelty of quadcopters means that authorities are still taking a fairly hands-off approach to regulating them. When legal disputes involving drones make the news, it’s usually about vigilantes who got annoyed by drones and decided to take the law into their own hands, rather than stories about law enforcement.

But Nigel Wilson of Nottingham, England, abused the generosity of lax law enforcement one too many times.

Wilson repeatedly flew his drone on wayward trips over and into soccer stadiums, recording games, and uploading videos on YouTube, in flagrant violation of a 2009 drone law, which forbids flying drones over large assemblies of people or within 165 feet of a building.

During one game last September, Wilson flew his drone too close to a mounted officer and startled his horse, which narrowly avoided running into members of the public. Wilson had also flown his drone over the Houses of Parliament and Buckingham Palace, and was eventually arrested last October and charged with illegal drone operations.

On Tuesday, Wilson pleaded guilty to the charges, and is believed to be the first person in Britain to be successfully prosecuted for violating civilian drone laws. The court ordered him to pay 2,400 pounds ($3,720) in fines and damages and forbade him from purchasing, owning, flying, or assisting anyone flying a drone for the next two years.

In the United States, a man was fined $1,100 for flying over the University of Virginia earlier this year, but did not face a criminal prosecution. On Aug. 25, a New Jersey man was indicted on two felony charges—criminal mischief and possession of a firearm for an unlawful purpose—for taking a shotgun to a drone flying over his neighbor’s home.

The problem with prosecuting people for violating drone laws is that evidence is often difficult to obtain, which is why it took a case as egregious as Wilson’s—frequently flying over large soccer games and popular landmarks while documenting his crime on YouTube—to result in a prosecution. Others have been luckier.

Between 2013 and 2015 in England, there were 170 complaints reported to police about drones flying over buildings, public places, houses, and gardens, according to Alan McKenna, a professor at Kent Law School.

McKenna told Wired that he couldn’t see how the British police could effectively enforce these kind of drone regulations unless each drone was required to include a GPS-device that recorded data that could be given to authorities.

“One of the complaints received by Lincolnshire Police was from a person who annoyed at having a drone fly over his garden took out a rifle, presumably an air rifle, and shot at the drone,” McKenna wrote on his blog. “The fact that he actually complained to the police about the drone and told them what he had done speaks volumes.”

Across the Atlantic, American homeowners shooting a neighbor’s drone out of the sky is a more frequent problem. The Federal Aviation Agency has stipulated that drones must stay a certain distance from airports, but aside from bans near special locales like the White House, give them virtual free rein elsewhere.

The legal vacuum has encouraged state and municipal governments to create a patchwork of laws governing drones, with inevitably uneven standards. Out of privacy concerns, the city of St. Bonifacius, Minnesota, (population: 2,300) banned any and all drones within the airspace of the city, while the state of Tennessee bans drone video surveillance of citizens who are “hunting and fishing.”

Legislators have been hesitant to establish stringent drone privacy laws, and for good reason. A rush to stamp out drone surveillance could have unintended consequences. Florida’s Freedom from Unwarranted Surveillance Act went into effect on July 1, outlawing drone surveillance that violate an individual’s “reasonable expectation of privacy,”whether by a civilian or the government.

While some exceptions have been made for business purposes, lawyers say that the law could open the door to frivolous lawsuits against legitimate uses of drone surveillance, such as documentation by insurance companies.

“There are a lot of litigators out there that predict this could inspire a new wave of litigation,” Matt Grosack, a Miami-based lawyer told Insurance Journal.