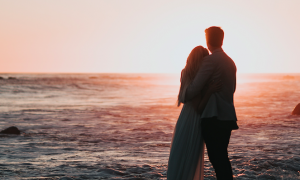 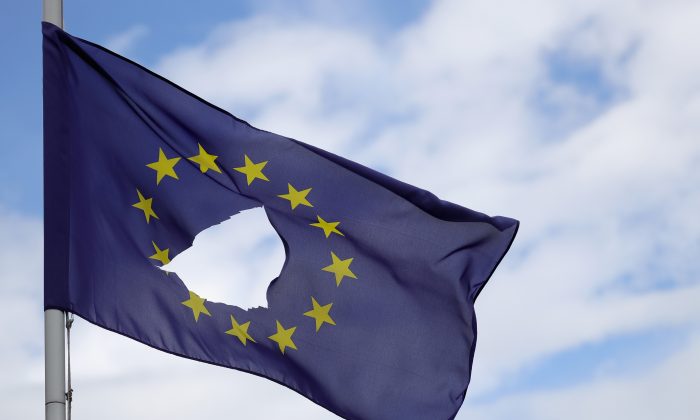 A European Union flag, with a hole cut in the middle, flies at half-mast outside a home in Knutsford Cheshire after the historic June 23 EU referendum, in Knutsford, U.K., on June 24, 2016. (Christopher Furlong/Getty Images)
Opinion

The British decision to leave the EU has been a long time in the making, but it does not lessen the shock that many politicians in the U.K. and across the EU are feeling.

While London begins the long process of negotiating an exit from the European Union, some of our attention must now turn to the rest of the organization and to the other member states.

Even though the U.K. has been an outlier, in terms of its attitudes towards the EU, it is far from alone in harboring people who want to change the direction and nature of the union. The ultimate success of the long-running British campaign to secure exit will have given succor to counterparts elsewhere to continue and redouble their efforts.

To some extent, euroskeptics outside the U.K. have an easier time of things. The use of proportional representation means it has been much easier for them to gain seats in national parliaments. And because vocal euroskeptics are to be found right across the European political spectrum, they have a relatively good chance of making it into a coalition government. They come from the right, the left, and even the center ground, and they already occupy positions of power in Denmark, Finland, and Poland.

Citizens in many European countries are also far more used to voting in referendums than the British, leaving their governments in a bind.

As the British debate has shown, it is very hard to argue a case against “giving the people a voice,” especially while the EU continues to look so weak in its response to the refugee crisis and the continuing failings of the eurozone.

Populists across the continent have seen the EU as both a symbol and a direct cause of what ails their countries. They have found it a particularly convenient target for blame when it comes to austerity and immigration. After all, the EU is poorly placed to defend itself and there are very few people at the national level willing to devote political capital to shielding it.

The End of the EU?

However, this desire to continue attacking the EU does not necessarily mean others will follow Britain out of the EU.

For one thing, the shock of the British vote is likely to concentrate a lot of minds. No longer merely an irritant, euroskepticism is now a clear and present threat to the union’s future development. That means ignoring or trivializing the problem looks less and less viable as a strategy.

Quite how the EU can engage with euroskeptics is not clear. It has not had a huge amount of success at becoming more democratic, despite good intentions. The best way to start is to build from a willingness to try to debate the issues. Euroskeptics might not have the answers to the EU’s woes, but they ask many of the right questions.

The British case is also likely to demonstrate the costs of exit much more graphically than any speech ever could. With a strong consensus from economists that the U.K. is now about to take a hit to its bottom line in the coming months, this might well give euroskeptics elsewhere second thoughts. This will only be strengthened by the likely desire of governments to offer the U.K. a less-than-generous deal, precisely so as to head off domestic demands.

Of course, in the longer term if it does prove that the U.K. is better off outside the EU, then this can only be bad for those same governments and good for euroskeptics. The threat of economic ruin will recede and everyone will have to recalibrate their understanding of the benefits of membership. However, this is something that will not become evident for several years at least.

And this brings us to the final logic: the U.K. is different.

As was rightly pointed out during the campaign, the U.K. had a number of opt-outs from various EU policies, including the Schengen system of free movement, justice, and home affairs and, most importantly, the euro. No other member state has such a degree of latitude.

This matters because the more a country is entangled in the EU, the harder it is to leave. Euro membership in particular is a degree of entanglement far beyond what the U.K. had.

Any eurozone country that voted to leave the EU would find that the resulting need to reintroduce its national currency would cause huge economic outflows (by those worried about a loss in value during any subsequent conversion process) that would dwarf anything we will see for the U.K. With no easy solution to this problem, those who might push for an exit from the EU might feel that the cost is simply too high.

However, such practicalities are not the point, at least not at this stage. There is now a scalp that euroskeptics from all countries can claim in support of their cause. They will now be looking for their next one.

Simon Usherwood is a senior lecturer in politics at the University of Surrey in the U.K. This article was originally published on The Conversation.