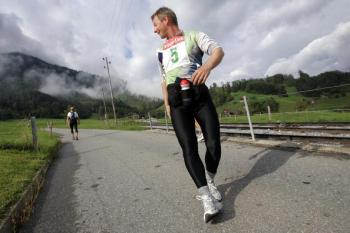 Running backwards is not just competitive, it is also promoted as a more complete workout than going forward since it works the quads, calves and shin muscles and is easy on the knees.

Backward running has grown in popularity globally, but still doesn't take itself all that seriously, remaining firmly in the category of Wacky Races. For instance, the New York Road Runners' annual backwards mile race is held on April Fool's Day.

James organized the Manchester race and also competed (although not very successfully by his own, self-deprecating account).

Competitive backward running is gaining momentum. World records are falling every few years. But the 100-meter record remains elusive. The world record of 13.6 seconds for the 100-meter set by Ferdi Ato Aboboe in 1991 was only been equaled by Roland Wegner, 15 years later in 2007.

The world record for running 100 meters forward is 9.69 seconds, held by Usain Bolt from Jamaica.

While humans run forward "naturally," backwards running needs to be learned. It’s not just about looking over the shoulder, the entire muscle system used is different. It has its own motor program that requires practice to increase efficiency.

Million-pound footballers use it in training. Champion boxers Mohamed Ali, known for his butterfly footwork, and Gene Tunney did too. Steve Reeves, a famous muscle-builder also did.

"As you get older, you have to do something to keep yourself fit,” he says. “You have to watch what you eat and I have a little regimen I do that I don't tell anybody about.

"A couple times a week I go running and I run backwards. I run up hills."

Running backwards was reportedly practiced in ancient China before being adopted in Europe in the 19th century.