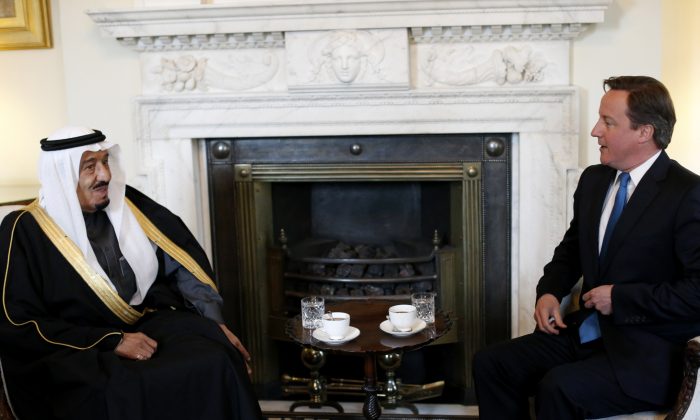 Britain's Prime Minister David Cameron (R) speaks with Saudi Arabia's Prince Salman bin Abdulaziz al-Saud during their meeting at No 10 Downing Street in London on April 3, 2012. The UK has pulled out of a trade deal with the kingdom following an outcry over its human rights. (MATT DUNHAM/AFP/Getty Images)
Middle East

Britain has abandoned a bid to provide training to Saudi Arabia’s penal system and raised the case of a 74-year-old Briton facing a flogging, following an outcry over human rights in the kingdom.

“The government has decided that it won’t be proceeding with the bid,” Prime Minister David Cameron’s spokeswoman told reporters.

The potential contract was worth £5.9 million.

Downing Street insisted the decision was separate from the case of the reportedly frail grandfather Karl Andree, who has been told he could face 350 lashes in public after serving a year behind bars for being caught with home-made wine.

The spokeswoman said the move was linked to the winding up of Just Solutions International, a commercial offshoot of the Ministry of Justice.

Saudi Arabia is Britain’s most important trade partner in the Middle East and was its biggest market for arms exports last year.

In an unusual move, Britain’s new opposition leader Jeremy Corbyn used his first party conference speech last month to call on Prime Minister David Cameron to intervene on behalf of Nimr, who was sentenced to death at the age of 17 for joining an anti-government demonstration.

In another sign of tensions over Saudi Arabia, newspapers reported on a rare split within the ruling Conservative Party over ties with the kingdom.

The Times said Justice Secretary Michael Gove wanted to pull out of the prison training deal agreed by his predecessor, but Foreign Secretary Philip Hammond thought it would make Britain look untrustworthy to a key ally.

Gove told parliament that even though the bid had been dropped Britain would continue to work closely with Saudi Arabia.

“There is security cooperation between Britain and Saudi Arabia that has saved British lives in the past.

“While we would never compromise our commitment to human rights … we should continue with the necessary security cooperation with the Saudi government,” Gove said.

He added that the government had “profound concerns” about human rights in Saudi Arabia, but that Britain must be allowed to use diplomacy to make progress on the issue.

“David Cameron has been shamed into a U-turn on this terrible contract, but why on Earth was it set up in the first place?” said Labour leader Corbyn.

‘Enough is enough’
The Downing Street spokeswoman said Andree’s sentence was “extremely concerning” and Cameron was “writing today to the Saudis to further raise the case”.

There has been a “gradual stepping up of government activity” on the issue, she said.
Andree’s family said they welcomed Cameron’s intervention after they appealed for clemency.

“He’s done his time now; he should be released. This lashing sentence – we fear, because of his age, he won’t survive it,” his son, Simon, told BBC radio.

He had implored Cameron to intervene personally, but feared his father was “at the bottom of the list”.

“I feel that all the business dealings with Saudi Arabia and the UK are probably taking priority,” he said.

The Sun carried the story on its front page.

It said that despite having served his sentence, Andree was still in jail as Saudi officials wait to carry out the flogging.

The grandfather of seven, who has already survived cancer, has lived in Saudi Arabia for 25 years, working in the oil industry.